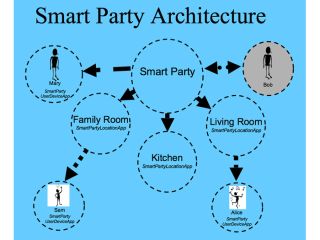 Two faculty members from UCLA in Los Angeles have come up with an ingenious Wi-Fi based solution to that eternal Friday-night problem - parties with music you hate.

The Smart Party system sounds simple in principle, but requires a lot of networking know-how and also raises some tricky copyright issues. In essence, it is a central computer that talks to all the wireless music devices carried by party guests to work out what tunes are most likely to please before downloading them for playback.

Those devices could be anything from smartphones to laptop PCs, as long as they carry music and a playlist. The set-up requires participants to install an application that tells their gadgets how to communicate with Smart Party, but after that it's entirely automatic.

So, if 20 out of 30 people in the room have players that reveal a penchant for Bach, that's what everyone will get to hear, regardless of the other 10 listening to nothing but Megadeth.

The only flaw in the prototype system so far surrounds everyone's pet hate - DRM copy protection. As the system needs to 'borrow' a copy of the music played from the various devices, it's unclear how legal it will be until some sort of temporary permission scheme is cooked up.

Astute thinkers will, however, soon realise that they can have a little fun and load the digital dice by toting track lists filled with the kind of music no-one wants to hear - Keith Harris and Orville or Paper Lace, anyone?