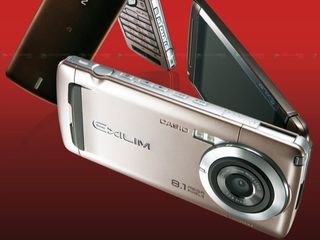 While we at TechRadar hate the megapixel frenzy the likes of Sony Ericsson and Samsung are bashing into the public consciousness, Casio's 8.1MP W63CA flip handset is something of wonder.

No, we like it because there's a real sense that this is a camera converted into a phone, not vice versa.

Using the Exilim engine from its 'proper' camera range, the system has been tweaked to work in a mobile phone environment, which should mean some pretty swish pics.

We get face detection, AF and automatic shooting, which is not really new, but should be handled far more effectively.

It has the usual YouTube shooting mode that's becoming popular on handsets these days, and also comes with HD display technology to make full use of that purdy little OLED.

Alas, it's only available in Japan... but camera phone development always begins in that technology hotbed, so if they're getting a 'proper' camera phone, then it shouldn't be too long until we get one too.