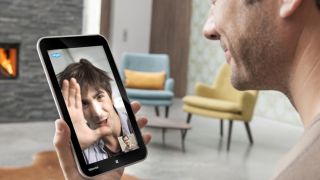 Can tablets compete with Phablets for use in the home?

The argument goes something like this: Apple dominated the tablet market, but now it's selling fewer iPads, so it will make a six-inch phablet instead. While many are jumping to conclusions that this means tablets are dead the facts show that the tablet's demise has been greatly exaggerated.

This doesn't mean that that Apple won't add a bigger phone to its arsenal. The rumours that Apple will produce a bigger iPhone won't go away, largely because the oversized phone/tablet (or phablet, if you really must) is massive in Asia, where Samsung is preparing to release a whopping seven-inch device.

Does this mean we are living in a post-iPad era, though? Ronan Cremin, CTO of mobile web company dotMobi doesn't think so, not yet at least.

"We have not reached the post-iPad era, though Apple and the iPad no longer dominate the competition," he says. "Our device usage figures show strong growth in Android use across the globe with 2,190 different Android-based tablets being tracked."

In short, it's starting to be all about Android. Over 195 million tablets were sold worldwide in 2013, an increase of a massive 68% on 2012, but it's Android tablets that are taking over.

Whatever the operating system though, it's pretty obvious that we're all crazy about tablets.

iPads 'unlikely to go away'

The tablet trend-setter, however, shouldn't be written off. "The iPad still represents a beautifully produced and highly intuitive state-of-the-art product in the midst of the Apple device ecosystem, that is unlikely to go away anytime soon," says Jeremy Silver, ex-EMI and Virgin Records music industry executive, advisor to the UK Technology Strategy Board and author of Digital Medieval.

"Never underestimate Apple's willingness to adapt," he says. "The splitting of the iPhone 5 into the iPhone 5S and iPhone 5C-class phones was the kind of thing Steve Jobs swore that the company would never do, but with consumer behaviour changing extremely quickly, Apple will be looking to adapt and advance in as many innovative ways as it can."

But perhaps iPad isn't as far behind its rivals as it might appear. The tablet trading industry in the UK is still in its infancy, but it's so far all about the iPad.

"A week after the iPad Air launch we saw a 585% increase in trade-ins, as gadget fans rushed to recycle their old devices in exchange for the new one," says Keir McConomy, founder of SellMyMobile.com.

Surrounded entirely by Apple devices, the Samsung Galaxy Tab 2 stands alone in seventh position. "Android users hang on to their tablets longer than they do with smartphones," says McConomy, whose business is picking up. He says that before 2013 there were surges in trade-ins only around big smartphone launches, not tablets.

The iPad may have peaked, but the tablet certainly has not. Ofcom reported last month that in the preceding year there was a three-fold increase in the use of tablet computers going online in the UK.

Ofcom's Adults' Media Use and Attitudes Report found that an increased use of tablets was behind a 25% increase in the number of people aged 65 and over accessing the internet.

However, there are some clues in the report that tablets just aren't as sticky as smartphones. Ofcom found that the device that people "would miss most" is the smartphone, at a whopping 42%. Next comes the TV. The tablet's nowhere in sight.

Trading figures follow that trend, too. "We're still not seeing the same volume of trade-ins around tablet devices as we do for smartphones," says McConomy.

Does that merely suggest that people are holding on to their tablet devices for longer than they are with smartphones?

"This may be because tablets are standing the test of time from a tech perspective, and people aren't as hungry to trade them in," says McConomy. "Or it may be because tablets tend to be shared devices, so they may be passed down to other family members over time, or just held onto as spare devices around the house."

Current page: The demise of the tablet has been exaggerated