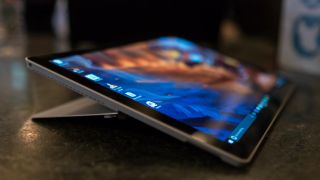 Tablet shipments will decline by 8.1% in 2015 compared to the previous year, according to the latest estimates from International Data Corporation. After three consecutive quarters of decline, IDC predicts that 211.3 million tablets will ship this year.

Even though outlook for the traditional tablet form factor may not be rosey, the category still shows momentum, thanks to the detachable form factor, which will represent a growing portion of total tablet shipments.

"The detachables segment will nearly double in size in the next year, recording more than 75% growth compared to 2015," said Jean Philippe Bouchard, Research Director at IDC, in a statement.

Small form factor tablets, which are primarily used for content consumption, will decline. IDC estimates that market share for the 7-inch to 9-inch category will decrease to 43% in 2019 from 64.1% in 2014. The void will be filled by medium and large tablets, with larger screen sizes that are more conducive for content creation.

IDC expects tablets in the 9-inch to 13-inch category will grow to 55.1% market share in 2019, up from 35.8% in 2014. Examples of tablets in this category include the Samsung Galaxy Note Pro 12.2, Apple iPad Pro, Microsoft Surface 3 and Microsoft Surface Pro 4. All these slates come with optional keyboard accessories and inking capabilities to help business users stay productive.

Large tablets with screens in excess of 13-inch will claim 2% of the market in 2019, according to the same report. Lenovo is experimenting with the Yoga Home 900, a 27-inch battery-powered, slim form factor AIO PC that could be used as an in-home or office tablet.

The growth in the convertible tablet category could represent a significant boost for Microsoft and its Windows operating system. IDC expects that market share for Windows-based convertibles to more than double by 2019.

Growth in the tablet market will also be driven by enterprise adoption, which could help reverse Apple's shrinking iPad market share, as the company targets prosumers and business users with the iPad Pro.

"Though early reviews for the iPad Pro have been mixed, we believe the Pro to be the only reason for Apple to gain tablet market share in the coming years," said Jitesh Ubrani, Senior Research Analyst, IDC Worldwide Mobile Device Trackers.

Convertible tablets with detachable keyboards often offer compromised user experiences when compared to standalone devices. For example, as a tablet, Microsoft's Surface Pro 4 may be too large and heavy for some, and as a notebook, the device's optional Type Cover keyboard is an expensive premium accessory that doesn't offer the best lapability experience of a traditional laptop.

However, when combined, the form factor offers several advantages that may be attractive to business users. Small businesses, in particular, could save money in adopting a hybrid device. With a Surface Pro 4, you could replace your iPad and your laptop, saving on hardware cost. This translates to reduced weight in a travel bag for business users, as they no longer have to carry two separate devices. Additionally, users no longer have to worry about how to safely store and synchronize data between two devices.