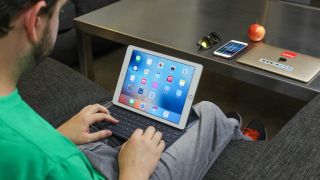 Apple is still king in the tablet world, although the overall picture for slates is a gloomy one according to the latest figures from Strategy Analytics.

The analyst firm's Q1 2016 figures showed that tablet shipments fell 10% to 46.7 million units. Apple was the leading vendor with a 22% market share of those shipments, but the company led by a country mile in terms of revenue with a 39% share (almost as much as all Android tablets combined which amounted to 41%).

Apple's profitability wasn't hurt by the iPad Pro performing very nicely, along with Microsoft's Surface range and other 2-in-1 and 'pro slate' devices, which Strategy Analytics noted are cannibalising tablets to an extent (and also desktop PCs, which are having an equally hard time of things).

The analyst company also observed that white box vendors (i.e. little-known brands) shipped 28% of all tablets in the first quarter of this year for a total of 13.3 million units, which brought in $750 million (around £520 million, or AU$1 billion) revenue.

In comparison, Microsoft shipped 1.1 million Surface tablets in the quarter and actually accrued more dough than those companies combined, making a total of $950 million (around £660 million, or AU$1.3 billion).

Peter King, Service Director, Tablet & Touchscreen Strategies, at Strategy Analytics commented: "Microsoft deserves credit for popularising the Pro Slate category, typified by a premium tablet with PC-grade processing power, with an optional keyboard to further add to revenues and profit. Combined with the success of Windows 10, many more OEM partners are launching Surface clones at lower price points to get a share of this lucrative, growing segment.

"Though it didn't gain first mover status, Apple now has two tiers of Pro Slates to join in the cannibalisation of the PC and Tablet markets, to the betterment of iPad ASPs (average selling prices)."

This reaffirms what we've been hearing about convertibles for a while – there aren't many bright spots in the PC or tablet arenas, but 2-in-1s are one of them, with major growth predicted for this year by pretty much all the analyst houses. So it's no surprise that plenty of other device manufacturers are jumping on the hybrid bandwagon.