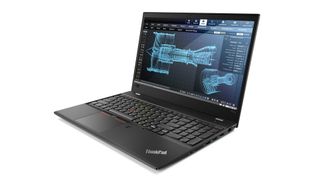 Lenovo has revealed a pair of fresh ThinkStation offerings, alongside a new ThinkPad which the company notes is the thinnest and lightest quad-core workstation notebook it has ever made.

Let’s start with the latter, the ThinkPad P52s, which crams plenty of power into an Ultrabook-style portable.

We’re talking an 8th-generation Intel Core i5 or i7 quad-core processor, Nvidia Quadro P500 graphics, up to 32GB system memory, and on the storage front, up to a 1TB NVMe SSD and 2TB spinning disk.

All this fits into a laptop which is 19.95mm thick and weighs 1.95kg, which in the workstation world is nicely portable indeed.

The IPS display can be a Full HD model, or optionally you can plump for a 4K resolution (or a Full HD touchscreen). There’s an option on a fingerprint reader for extra security, too.

Lenovo also notes that battery longevity is a strong suit with this notebook, stating that: “Lenovo’s PowerBridge technology provides all day power – allowing you to work seamlessly, without the hassle of recharging.”

No claimed battery life figures have been given at this point, though.

Moving onto the ThinkStation tower PCs, the first is the P520, which is backed up by a more compact machine in the form of the P520c, and these are mainstream single CPU workstations.

Both can be equipped with an Intel Xeon W Series processor boasting up to 18 cores and speeds of up to 4.5GHz.

All of these fresh Lenovo offerings will go on sale towards the end of January 2018, with exact pricing to be confirmed.