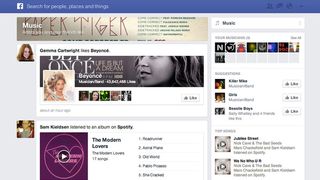 Pandora sharing to Facebook has existed for some time, but the new social integration is "effortless," wrote Pandora's chief technology officer and executive vice president of product, Tom Conrad.

Conrad wrote that Pandora activity can now be automatically published to Facebook, and that the activity can be integrated with Facebook's new music section.

"This means it's easier than ever to discover new music from friends' listening activity in your Facebook News Feed or by checking out the music section on their profile," he explained.

No, not a Facebook Music service - just a new tab of users' news feeds that catalogues musical tastes and activities.

The music section was introduced in March when the social network revealed its latest Facebook redesign.

Pandora is the latest music listening service to integrate with this new feature.

Automatic Facebook sharing can be toggled on and off at will in the Pandora apps or on the website.

Users can also customize exactly what they want to share.

"This new feature puts you totally in control of what's shared and the experience is entirely opt in," Conrad wrote.

"Music is a natural facilitator of connections between people and we're excited to help strengthen those bonds around all of the music you're discovering on Pandora," Conrad finished.