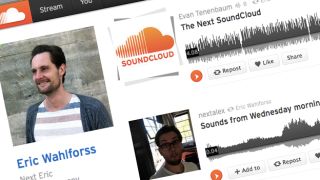 Pushing waveforms to the forefront

SoundCloud, the popular social platform that allows musicians to share and receive feedback on their latest creations, has announced a redesign which aims to keep the music flowing.

The service's campaign to 'unmute the web' will be spearheaded by new profile (You) and Your Stream pages which it hopes will make it as easy to share sounds as it is to share your photos and videos.

As part of this drive, the company has pushed the popular 'Waveform' representation of uploaded music files to the forefront and dramatically reduced the clutter, making it easier to browse likes and comments.

The new SoundCloud.com also makes it infinitely easier for friends to repost, like or share your creations, opening mixes and tracks up to a wider audience.

The revamp also aims to keep the music flowing. Just one click of the play button will continue to play music from Your Stream (the people you follow) rather than halting at the end of the first track.

SoundCloud is also introducing a new sets feature, its own take on playlists. The Sets, built from sounds you've collated, are brought together in one Waveform, rather than a series of tracks.

The ability to discover new Sounds has also been enhanced with improved algorithms, while results will appear as you type.

"The Next SoundCloud has been re-engineered from the inside out," said Eric Wahlforss, SoundCloud founder & CTO.

"It's much more than an aesthetic change. By making use of state of the art technologies available in the latest generation browsers, we've created a technology platform that enables us to provide a much better user experience and develop new features faster."

The new clutter-less SoundCloud is in private Beta at the moment, but will be rolled out across the various territories in the months to come.