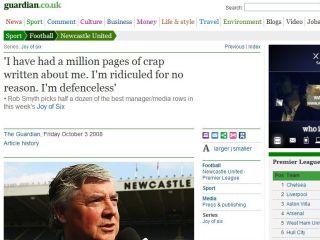 Despite weak protestations during the interview from Newcastle's press officer that journalists delete their tapes of the conference, the manager insisted that he was fine with the content being published.

And he got his way, with the Guardian transcribing and running huge chunks of the priceless argument and the Mirror – whose journalist Simon Bird was the first butt of Kinnear's name calling – putting a recording on its website and YouTube.

Both the transcripts and the recording have been visited by masses of amused fans – and emails containing Kinnear's rant have spread through email inboxes throughout Britain.

Kinnear, it seems, was so enraged at reports covering his decision to give the players a day off that he will not conduct any more press conferences.

As well as singling out Bird and the Daily Express' Niall Hickman at the opening of the conference and calling them c****, Kinnear also suggested some of the assembled journalists were slimy and accused them of undermining his position.

If you listen to one piece of audio today – and don't get offended by swearing – then you really should tune in to this.