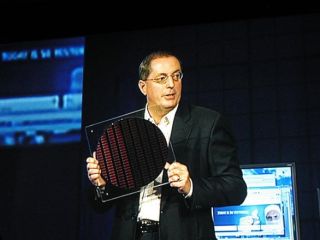 Intel's announcement of agreeing to pay £4.9 billion for McAfee caught everyone by surprise for a number of reasons.

It seems odd that a chip maker would shell out that kind of money for an anti-virus company, despite its vast portfolio of home and enterprise products.

McAfee may be at the top of the game, but the anti-virus segment is saturated with products that may cost your company a small fortune or cost you nothing for scanning your home PC.

And if it was just software products that it was after, why didn't the world's largest semiconductor chip maker just let its R&D department take a bite out of its treasure chest?

No, there's more to this agreement than meets the eye. Intel makes money by making chips smarter and smaller, which in the current context covers devices that are power-efficient and internet-enabled. Intel's CEO Paul Otellini might say security adds another dimension to this mix, but it's just part of its 'making chips smarter' campaign.

Which is what this agreement seems to be all about: making virus-repellent chips in upcoming internet-enabled devices. Intel plans to take protection from threats beyond software.

The advantage to Intel

One advantage of this move to the company is that it makes it impervious to policy changes of ISPs and device vendors, something McAfee is well aware of as it lost 15.7 million Comcast customers because the ISP shifted to Symantec earlier this year.

Secondly, the move comes just as the joint-venture between Intel and Nokia, MeeGo, prepares to roll out on a variety of consumer devices. Security has been a threat to computing ever since we got on the internet. But with MeeGo all set for consumer devices, from smart phones to smart TVs, it seems to be the right time for Intel to start pitching security as the third pillar of computing.

Then there's the fact that there's more to Intel than MeeGo. The number of devices that ship with Intel chips will always outnumber those that ship with MeeGo. By bringing down security to the level of flashable hardware, Intel's got all its bases covered. As a consumer, you'd feel more protected buying an Intel-powered internet-enabled device, irrespective of the software running on top of it.

Although it might sound like a win-win situation for all, it isn't. The Intel-endorsed "Trusted Computing" initiative didn't go down well with the Free Software Foundation, which argues it can be used to lock out devices. Add the McAfee acquisition (a la endpoint encryption) to Intel's Trusted Execution Technology and you're just inching closer towards vendor lock-in, a nightmarish situation for free and open source applications.

Even from a consumer's point of view, although it adds a degree of convenience, tied to the hardware, the ramifications of a botched virus update can be far more devastating than they are at the level of the software.