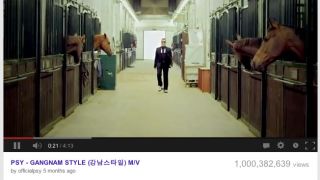 Because sometimes the internet just nails it...

We don't often bring you YouTube figure stories, but when it's internet legend Psy and his Bieber-topping Gangnam Style then we are prepared to make an exception.

Yep, that's right Gangnam Style has hit a massive landmark of a BILLION YouTube views, and you should celebrate with a little horsey dancing.

Obviously next year we'll be talking about a video that does two billion because, you know, it's the internet and 100,000 views used to seem like loads.

But in the meantime you can rest assured that the best that Korean pop has to offer has knocked Justin off of his perch at the top of YouTube.

If you haven't checked out Psy's dance, then just turn up at any given disco/party or wedding to see it imperfectly performed by any number of people who are too old to be dancing that, or possibly TechRadar's Gareth Beavis.

If you have any predictions about what will be next year's big video then feel free to share them in the comment - but in the meantime, Oppan Gangnam Style!