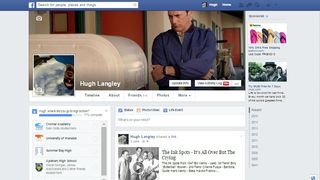 Facebook is playing dirty in its quest to be a bigger video platform than YouTube, according to popular vlogging star Hank Green.

Green, who makes up one half of the Blogbrothers, a video duo who have racked up more than 552 million views, has published a blog post called 'Theft, Lies, and Facebook Video', which criticises Facebook's behaviour when it comes to video.

Green complains that Facebook not only promotes natively posted videos more so than embedded YouTube videos, but also exaggerates the number of viewers.

"A SciShow YouTube video embedded on Facebook will reach between 20,000 and 50,000 people and be viewed by hundreds of people," writes Green. "The same video uploaded natively will get a reach of between 60,000 and 150,000 and be 'viewed' by tens of thousands."

Green says that what constitutes as a video "view" on Facebook is much different to YouTube. He claims that a video need only be watched for three seconds to count as a "view" on the big blue social network, while on YouTube it's thirty seconds.

In his blog post, Green quotes an earlier report from Ogilvy and Tubular Labs that claimed out of the 1000 most popular Facebook videos of Q1 2015, 725 were re-uploads.

As Green argues, Facebook isn't doing enough to solve this problem. "They'll take the video down a couple days after you let them know. Y'know, once it's received 99.9% of the views it will ever receive."

Facebook's response to pirated videos is to eventually take them down, but Google has a better solution: its "Content ID" system lets it analyse uploaded videos and ensure that revenues are fairly paid to the original rights holders.

Why doesn't Facebook have a similar tool in its utility belt? That's the question Green is asking, and Facebook's response is essentially "We're listening and trying to make things better".

Matt Pakes, a Facebook project manager, defended Facebook's method of promoting its own videos, claiming that users are more likely to engage with a natively uploaded clip. You can read the full response here.