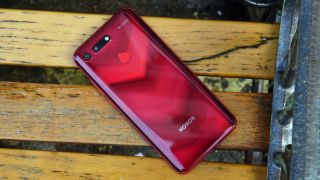 The Honor View 20 smartphone was released globally on 22nd January at an event in Paris, and will go on sale in India on the 29th. Now ahead of the launch, a fresh leak has made public the India price tag of the base variant of the much-anticipated smartphone.

The leak has revealed the price of the 6GB/128GB variant of the Honor View 20 to be Rs 35,999. The phone will be available exclusively on Amazon India in at least two colour variants- Midnight Black and Blue Sapphire. There is no confirmation as yet as to whether the higher variant, with 8GB RAM and the same 128 GB storage, will be released in India; it is priced in China at 3499 Yuan (under the name Honor V20).

The 6GB/128GB variant of the OnePlus 6T (which boasts an in-display fingerprint sensor) is priced at Rs 37,999. The Honor View 20 is commonly viewed as Honor's reply to the OnePlus 6T. It has a 6.4-inch full HD+ display with a punch-hole selfie camera that has a 25MP sensor. The rear camera module has a 48MP Sony IMX586 sensor, as well as a 3D ToF stereo camera.

Under the hood is a Kirin 980 SoC, and the phone runs on the Magic UI 2.0, on which is based the Android 9 Pie OS out of the box. It also packs a massive 4000mAh battery with rapid charging support.

For a full rundown, you can read TechRadar's Honor View 20 review and reach your own conclusions ahead of the India launch.