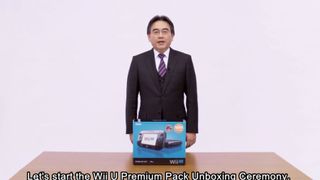 If you're excited that the Wii U will launch here in the UK at the end of the month, here's a special treat: an unboxing, courtesy of Nintendo's president Satoru Iwata.

It's a tongue-in-cheek affair, with the Nintendo boss declaring: "Perhaps we could call it an official pre-release unboxing ceremony."

At one point he quips: "It feels like I'm a host on a shopping channel."

The ceremonial music fits the bill too.

Iwata is showing off the Premium Pack, which is the pricier option. Though disappointingly he doesn't tear it open and fling the contents all over the place like an excited kid at Christmas. Instead he goes through it all methodically, detailing what you get for your money.

He dons a pair of white gloves for the task too, saying they make him feel like Mario.

The Wii U console and GamePad controller come in one cardboard tray.

In the other, there are a couple of AC adapters, the manual, the Wii U stand, an HDMI cable, the GamePad cradle to recharge it, and the GamePad stand for when you're playing.

The Wii U launches in the UK on November 30, and in the US on the 18th. It'll be the only console from a major player on sale this Christmas, but it has divided opinion, mainly due to the GamePad controller. It mimics tablets like the iPad, and provides a second screen, but some say it loses the simplicity of the original Wii.