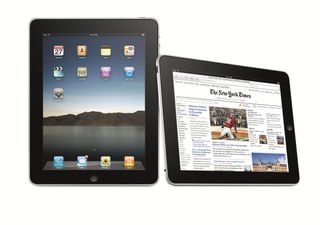 Apple iPad - no worries in the tablet market

Apple released its 'phenomenal' financial results this week and with Steve Jobs out of action, COO Tim Cook was given the thankless task of speaking to the press about the company's 2010 success story – the Apple iPad.

When grilled about the state of the tablet market, Cook was quick to put the boot in to any iPad rival explaining that, at the moment, Apple has "no worry" when it comes to tablet dominance.

Cook on the Apple earnings call said about tablets: "There's not much out there as you know. There are two kinds of groups today [in the market] – the ones using a Windows-based operating system. They're big, heavy and expensive. Weak battery life. Need keyboard or stylus. From our point of view, customers aren't interested in that.

"Then you have the Android tablets. The variety shipping today, the OS wasn't designed for a tablet – but Google said this.

"So you wind up having the size of a tablet that's less than reasonable. Or one that's not even a real tablet experience. It's a "scaled-up smartphone" – that's a bizarre product in our view.

"If you do a side-by-side with an iPad, some enormous percentage are going to pick the iPad. We have no concern there."

When it comes to the future of the market, it seems that the iPad's reliance on iTunes and the app store will win through, with Cook saying: "We have a huge first-mover advantage. And a huge user advantage from iTunes to the App Store. Huge number of apps and an ecosystem. We're very confident entering into a fight with anyone."

Currently, the Apple iPad has a massive 87.4 per cent share of the tablet market, which puts it in good stead for 2011.