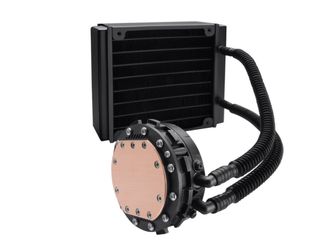 Corsair has unveiled the Hydro Series H70 ultra-performance CPU cooler – billing it as a significant evolution on the popular H50.

The Corsair Hydro Series H70, like the H50, brings the benefits of water cooling in a sealed unit with no maintenance required.

The H70 brings several upgrades on its predecessor, including a double thickness radiator with higher heat-exchanging capacity and a pump/cold plate unit with increased efficiency.

"Thanks to the H70, you no longer need a fin array the size of a small shoebox to cool aggressively overclocked CPUs," stated John Beekley, VP of Technical Marketing at Corsair.

"The H70 stands toe-to-toe with any CPU cooler on the market, and does it with less noise, easier installation, and support of nearly every ATX-compatible case."