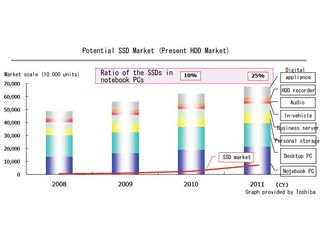 We already know that solid state disks (SSDs) are slowly pushing out hard drives to make a dent in the laptop storage arena, but could not have predicted that they’d snare a quarter of the market by 2011.

That forecast comes courtesy of an executive in charge of the storage business at Toshiba Japan. Speaking at the IDEMA conference there, Shozo Saito said that 25 per cent of notebooks would come with SSD storage in three years.

On the size front, Saito said that Toshiba would be scaling up its SSDs to 512GB from the current maximum of 128GB. Naturally, the price premium over standard hard drives will remain but the gap will shrink as the price of NAND flash memory falls.

Current 2.5-inch laptop SSDs cost 6.4 times as much as hard drives – Saito claims the multiplier will fall to half that value by 2010, which is undoubtedly why he’s so confident about the take-up of solid state storage.