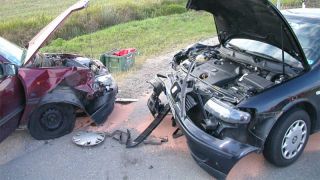 Car-tech nightmares? Carmageddon out of here!

The intelligent, connected car is an idea we love on TechRadar. But wherever there's new tech, there are bad guys to exploit it or things that can go wrong.

1. Cars will become as (un)reliable as computers

That was then. Today, cars and computing are on a convergence - you could say collision - course. Some cars have up to 150 or more computer chips on board. Renault, to take just one recent example, has chosen Google's Android OS to power its in-car kit.

The implication, then, is that cars will become increasingly reliant on computing for everything they do. And our experience of computing in just about every other walk of life is that it's far from 100 per cent reliable. How soon before an operating system crash turns into one that hurts more than just a few files?

If cars could soon be crashing due to sheer computational complexity and human error in design and engineering, what about the scope for good old malice?

With cars becoming increasingly computerised, internet-connected and also sharing software platforms with more commonly used computing devices, can it really be long before viruses and other malware begins to target cars? Also, more and more cars are internet-connected, so an infection could happen at almost any moment.

If you start to think laterally, all sorts of sinister opportunities arise, and not just the apocalyptic, life-threatening sort. Imagine a future where all tyres have RFIDs. Could a tyre company send out a virus that detected tyres from rival companies and then hack the target vehicle to encourage faster tyre wear? If you can imagine it, maybe it's possible.

We've spoken to engineers at several car makers and they assure us that the way systems are compartmentalised and firewalled means it simply isn't possible for a virus to migrate from, say, the entertainment kit to a more safety-critical system like cruise control or lane departure correction.

But isn't that what they always say – that it could never happen – just before Armageddon strikes? You know it's true!

3. Your car will get nicked by cyber thieves

The happy news is that this is already happening. Due to legislation drawn up with the best intentions and pertaining to easy access to the on-board diagnostic port, it's now possible to smash a a quarter light, plug in a cable and gain full operational access within a few moments.

If that's today, the nightmare scenario for tomorrow's connected cars is thieves doing the same job wirelessly over the internet, avoiding the need for any kind of break in. They simply hack and prime the car from a remote location and nip over when it's ready for pinching. WIth self-driving cars on the way, it's not inconceivable that thieves might find a way of driving your car away without even being present at the scene.

Already, cars from several brands can be unlocked remotely via a cellular connection. Seriously, people, it's going to happen.

4. Your bunny-boiling ex will track you via GPS

If that sounds like a bad movie plot, try this for size. A self-contained GPS device that attaches to cars in an instant courtesy of a magnetic pad can be had for as little as £100.

The Back2you personal GPS tracker is a perfect example. Smaller than a pack of cards, it has both GPS and a GSM/GPRS cellular adapter. Simply slap it onto a target vehicle – any steel bodied car is a suitable target – and then all that's required is a call to the device's mobile number.