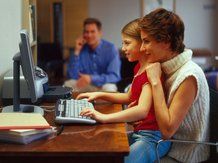 Best keep an eye on your child's internet use

Experts found that hundreds of kids at Greater Manchester primary and secondary schools are not only looking at smut during the school day, but also using the PCs to send abusive and bullying messages as well.

E-safe Education carried out the research, which found the average school triggered between 50 to 100 'serious alerts' per day, according to the Manchester Evening News.

Around 30 per cent of these were because of hardcore pornography being viewed, while the rest centred on cyber-threats.

The survey looked at 40 schools in the Greater Manchester area, as well as 60 schools from further afield, alerting the teachers every time inappropriate content was viewed or sent.

Derek Davies, Head of Stretford High, said: "We've had to update our computer firewalls three times since I've been here. Facebook and MSN messenger are banned, but the students are very inventive in finding ways around this.

"Cyberbullying can be a problem, especially among some of the girls, and can be very hurtful because the comments are just heard by a few people. Even though comments are normally posted outside school, it is something we take very seriously."