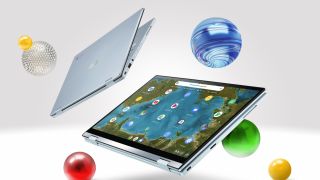 Asus is one of the most well-respected laptop manufacturers around, and offers a diverse range of notebooks, many of which are strong products, and keenly priced too. And set to get an even keener edge, with any luck, when some of said prices are inevitably trimmed come Black Friday.

We are keeping our fingers crossed that the Asus Chromebook Flip C433 will be one of those models that gets such a discount, mainly because the Chromebook Flip is, in fact, our top pick for the best Asus laptop of 2019.

Now, note that we haven’t reviewed the exact C433 model highlighted here – we evaluated the C302 in our extensive review, which is the older predecessor model, and has since been supplanted by the Flip C434 and the C433 (the latter laptop which we’re talking about here is a cut-down version of the former).

So, how does the C433 convertible notebook, which is essentially a more wallet-friendly version of the C434, stack up? Read on for our expert buying advice outlining the essential differences, which will help you decide whether the Flip C433 is worth forking out for. Or indeed flipping out for, perhaps.

And don’t forget, we have a page dedicated to highlighting all the best Black Friday laptop deals – Asus or otherwise – which bargain hunters would do well to bookmark in advance of the big day (price-cutting has already started, remember).

The bottom line: The Chromebook Flip C433 represents a great option for a 2-in-1 Chromebook which maintains a premium look, and indeed some premium features, at a relatively wallet-friendly price – which hopefully Black Friday discounts will make even more tempting.

Pros: The ‘nano-edge’ screen looks great, and means a 14-inch display fits into a relatively small laptop chassis. It’s a convertible, so can be both your laptop and tablet. This 2-in-1 is also plenty powerful enough to run all the Chrome OS apps you might want.

Cons: Stiff hinge can make this notebook a bit of a pain to open according to some owners. Build quality isn’t as good as its bigger brother the Flip C434. And depending on discounts and exact pricing, that C434 might therefore make a better choice.

Asus Chromebook Flip C433: everything you need to know

The first thing to bear in mind here is that this is a Chromebook, not a Windows laptop. So that means it has Chrome OS as an operating system, and you won’t be able to run traditional Windows programs on it. For more details on this, see our primer on what a Chromebook is, and our general guide discussing whether this kind of notebook might be the right choice for you.

As the name suggests, the Chromebook Flip is a convertible which has a 360-degree hinge that allows the laptop to be folded back on itself to be used as a tablet (or a stand for when you’re watching movies, say).

The other key point is that this is a budget version of the C434, as we’ve already mentioned. The build quality of this 2-in-1 isn’t as premium as that C434 model, as you might imagine, but otherwise it’s essentially the same machine save for some other minor differences, like the display not being as good with colors (it doesn’t have the C434’s 100% sRGB color gamut coverage). That said, untrained eyes may not be able to spot much difference, and the screen is still good enough for what you’re paying…

Big but small: The 14-inch Full HD touchscreen has ‘nano-edges’ meaning very thin bezels (the edges surrounding the display), which allows the C433 to actually be smaller than the old Flip C302, while having 1.5-inches more screen real-estate. It’s sort of like the TARDIS in that respect (but without the ‘wibbly lever’).

Still has premium features: Despite the price, this Chromebook still maintains a premium look thanks to a nice finish, and particularly those slim screen bezels help to give a high-end appearance. Plus it has some quite nifty features for this price bracket including a backlit keyboard (it’s a nice keyboard, and offers a pleasant typing experience, too).

Weight: While the C433 might use clever design tricks to be nicely compact for its screen size, it is heavy. In fact, it weighs 1.47kg, which is relatively hefty for a small laptop. Another slight downer is that we’ve seen complaints from some buyers online that the hinge is quite stiff, and it’s a bit of a struggle to open the notebook.

Conclusion: This is a very smart-looking portable which is a cut above your average Chromebook, and carries some premium features, even if the build quality isn’t up to its bigger Flip C434 brother. But then, a cheaper machine is always going to have some corners cut, and at least they haven’t been cut in any way which hampers the performance of this laptop. The choice of whether to buy the C433 or C434 may boil down to the exact pricing of these models at the time you’re looking, and how much of a Black Friday discount has been applied, but this Flip C433 is likely to be a great choice for those looking for a sterling Chromebook without having to fork out too much.