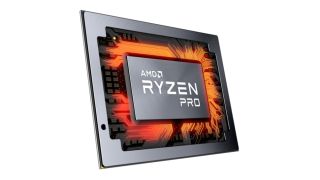 As well as revealing the initial details about its Ryzen 2 and new Ryzen mobile processors at CES in Las Vegas, AMD also took the wraps off its first Ryzen Pro mobile CPUs.

Targeted at business laptops and ‘commercial ultra-thin’ models as well as workstations, AMD has three new processors which come with integrated Radeon Vega Graphics: the Ryzen 3 Pro 2300U, Ryzen 5 Pro 2500U and the Ryzen 7 Pro 2700U. In terms of core specs, they mirror the respective consumer versions of these chips.

So the entry-tier Ryzen 3 Pro CPU is a quad-core (four-thread) model clocked at up to 3.4GHz with boost, with integrated Vega Graphics boasting six graphics compute units and a GPU clock of up to 1100MHz.

Stepping up to the Ryzen 5 Pro, this is a quad-core (eight-thread) CPU clocked at up to 3.6GHz, with Vega Graphics offering eight graphics compute units and the same GPU clock speed as the Ryzen 3 Pro offering.

At the top of the tree is the Ryzen 7 Pro, which is also a quad-core (eight-thread) processor clocked at up to 3.8GHz, with the integrated Vega Graphics having 10 graphics compute units and a GPU clock of up to 1300MHz. All these processors have a TDP of 15W.

To give you an idea of ballpark performance, AMD claims that according to its own benchmarking using PCMark 10, the Ryzen 7 Pro is around 22% faster than Intel’s Core i7-8550U for productivity tasks.

And for graphics performance, going by 3DMark 11 benchmarks, the Ryzen 7 Pro is around 125% faster than that Intel processor.

The company also said it was targeting up to 13.5 hours battery life with the Ryzen 7 Pro CPU, with that estimation based on using a notebook with a 50Wh battery.

And of course ‘state-of-the-art’ security is promised with these chips, as you would expect from business-targeted models, with additional security features including 128-bit AES data encryption, AMD GuardMI technology and Windows 10 Enterprise security support.

When can we expect to see these Ryzen Pro mobile processors hit the market? AMD says they will be out in the second quarter of this year.