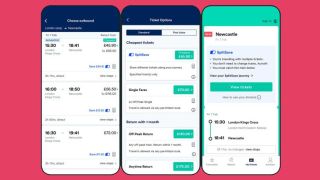 Ticket-booking app Trainline now offers a split-ticket feature that could make long journeys considerably cheaper. Trainline isn't the first company to calculate split-ticket prices, but as the biggest train and coach app in Europe, it's bringing the option to thousands of people who might not otherwise know about it.

Few people would argue that travelling by train in the UK can be expensive, particularly if you don't plan ahead. The array of tickets on offer can be confusing too! For those in the know, one of the best ways to make massive savings is by split-ticketing. It might not seem logical, but it can often be significantly cheaper to divide a journey into multiple legs.

Rather than buying a single ticket from A to B, you could instead buy one ticket for the first half of the journey, and another for the second. Even though you don't change trains, you can still save money. Manually checking the best way to divide up a journey can be nightmarish, which is where tools like Trainline's new feature come in.

Split a ticket, save a packet

Announcing the new money-saving feature, Trainline explains : "if you're travelling from London to Manchester, you can buy two tickets – one from London Euston to Stockport and one from Stockport to Manchester Piccadilly – rather than a single ticket covering the entire journey".

The company concedes that it "may sound strange" that buying multiple tickets for a journey can be a cheaper option, it is completely legal and still means that you're able to reserve seats on a train – although on some journeys you may need to swap seats along the way.

SplitSave is driven by machine learning, and as well as saving you money, it can also save you time. There's no need to specifically hunt out split tickets. If the option is available on the route you're travelling, the app will automatically show this in the list of search results – just keep an eye out for the blue and white SplitSave icon next time you're buying tickets.

You can download the Trainline app for iOS and Android free of charge.