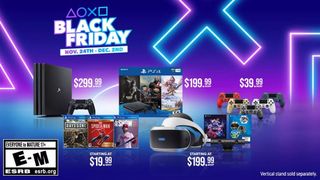 Sony has revealed its official Black Friday PS4 and PS4 Pro deals - and there's some great PlayStation console and games discounts to score during the week of Black Friday 2019, which starts November 24.

Just looking some some PS4 games or PS4 accessories? Select Sony exclusives like Days Gone and Marvel's Spider-Man are just $19.99, while you can get a DualShock 4 wireless controller for only $39.99.

In addition, there will be 25% off PlayStation Plus 12 month subscription and PlayStation Hits games for just $9.99 (though we're not exactly sure what those include yet). Plus much more.

It's worth noting that these deals are not live yet and will run from November 24 to December 2.

Check out the best of Sony's official PlayStation Black Friday deals below:

1TB PlayStation 4 Slim: Horizon Zero Dawn: Complete Edition | The Last of Us Remasted | God of War | $199.99 at PlayStation
This incredible PS4 bundle is a steal for just under $200. For that price you get a 1TB console and three of the best PS4 exclusives. It's an absolute bargain but won't be available until November 24 - so mark your calendar.

PlayStation 4 Pro: $299.99 at PlayStation
Typically the PS4 Pro would set you back nearly $400 but Sony is offering the powerful console for $100 more. So if you've been waiting to pick one up then now is the perfect time.

PSVR bundle: PSVR Headset | PS Camera | Astro Bot Rescue Mission | Skyrim VR | Resident Evil 7: Biohazard |Everybody’s Golf VR | PlayStation VR Worlds $199.99 at PlayStation
This PSVR bundle is fantastic for those wanting to jump into virtual reality with both feet. Usually a bundle like this would cost around $300, so Sony's offer saves you around $100.

DualShock 4 controller: all available colors | $39.99 at PlayStation
Looking to pick up a spare PS4 controller? Now could be the perfect time. Sony is offering DualShock 4s for $39.99, saving you around $20 on a controller that would usually cost at least $60.

Days Gone: PS4 | $19.99 at PlayStation
Days Gone had a bit of a mixed reception but usually the Sony exclusive would set you back around $30, so a $10 saving is not to be scoffed at.