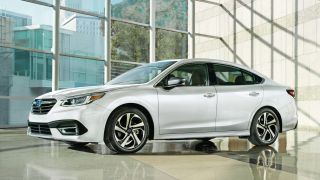 In a matter of seconds, the 2020 Subaru Legacy Limited will recognize you and adjust the seat position, mirrors, climate settings, and even the last screen you used on the display.

I know this because, after jumping in the car several times over a week, I never had to think about the saved settings. When I asked a friend to jump in, the Legacy didn’t recognize him. Like a phone that senses who you are, the Legacy provides access to your favorite settings.

In the future, it won’t let anyone else drive the car.

That’s the ultimate goal for the autonomous driving future we’ll all expecting when cars can detect us, start driving where we want them to go, read our schedules and emails, and act as an automated agent of service to bring us where we need to go on time.

For now, I liked how the Legacy works so fast. A camera detects your face – using the same system I wrote about in the Subaru Forrester a while ago called DriverFocus. Up to five users can save their settings, and it’s just a simple matter of tapping in your name. I was able to swap out my name and delete others, almost like I was using an iPad.

The Legacy sedan uses a massive new 11.6-inch nav screen, where I added myself as a user. The split screen can show Apple CarPlay or Android Auto in one portion with the climate settings on the lower half. When I jumped in to drive, I noticed my last setting for the seat heater and temp level were the same. Many cars don’t do this -- they disable the seat heater, for example, for every time you drive so you have to enable it again.

Mirrors and seat position are typically another annoyance, not really for those who drive their own car but when you share a car. Every time you drive you to have to make adjustments to the mirrors even if the seat can use a custom user setting (with the buttons on the door).

You also have to know how to save the seat settings, usually a long press on the 'set' button. It’s surprising how many people I know who don’t realize there is a saved seat option.

With the Legacy, they don’t have to know. Once you add yourself as a user (or for the non-technical folks, have someone do that for you), then there’s nothing else to do. The car recognizes you and you start driving. I ended up not even noticing the adjustments.

My thoughts drifted to how this will work in the future. Once the car recognizes you and, as mentioned earlier, calls up your calendar and email, it might know you need to go to a meeting across town and even find the route you like best. It could send off a quick email about when you will arrive.

And, eventually, it might even know that you typically like to do a quick video chat with your kids at the same time every day -- in short, once cars recognize us, they can customize every setting, where we drive, and what we do.

This will involve musical taste, routing, and even how the car drives. Today the Legacy doesn’t adjust itself in terms of a sports mode or extra traction control, but I know that would come in handy. Cars might even know us better than we know ourselves.