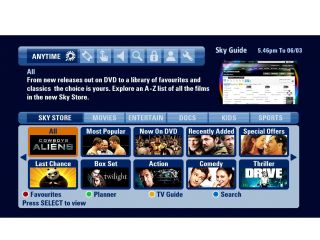 Anytime+ gets an upgrade

Sky has announced that it is adding more pay-as-you-go movie content to its Sky Store, as it moves to take on the likes of Lovefilm, iTunes and Netflix for on-demand rental content.

In a press release, Sky was keen to point out how it matches up with Lovefilm and iTunes in terms of rentals and it seems to be doing a pretty good job.

According to Sky, this means its older library movies (SD) are 50p cheaper than both iTunes and Lovefilm.

It has also been announced that Sky customers will be able to rent movies from the Sky Store via Sky Go on a PC or Mac. Non Anytime+ users will still get Sky Box Office, with the added bonus of more content.

Immortals, Paranormal Activity 3 and The Three Musketeers are three premium movies which are heading to Sky Store this month.

There's also Patch Adams coming for 99p, but the less said about that the better.