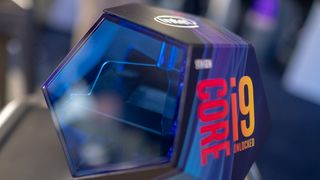 Intel’s Core i9-10900K, the firm’s incoming flagship chip for Comet Lake desktop CPUs, has been spotted in 3DMark, revealing that it will boost to 5.1GHz.

The processor is listed in the 3DMark database and was uncovered by @_rogame on Twitter, with a reported base clock of 3.7GHz.

So, assuming this leak is correct, we’ve now got a glimpse of how the 10900K will run, albeit without any details of the power consumption – as you can see in the tweet above, that isn’t listed (some of the details are missing).

The Core i9-10900K is a 10-core (20-thread) processor, and the 5.1GHz boost result is in line with previous rumors, adding a little more weight to the possibility that it’s on the money.

Remember that 5.1GHz is purportedly the single-core boost, of course, and it won’t be able to hit this speed across all 10-cores. However, previous speculation has pointed to Intel reaching a little higher in terms of Turbo with Thermal Velocity Boost technology, which could hit 5.3GHz (on one core – if the CPU is running cool enough).

While the big numbers might be dazzling, those beefy boosts will be situational, and there’s a limit to how long they can be maintained for. A lot will depend on the cooling solution used with the processor (and related issues like case airflow), of course, and the power consumption of Intel’s next-gen chips is certainly something that has been a cause for concern looking at recent chatter online.

And rightly so, really, given that one of the other major rumors around Comet Lake desktop chips is that their delay – they were a no-show at CES in January, despite firm expectations that Intel would be unveiling something – might be down to struggles with power usage, specifically with the flagship 10900K.

That wouldn’t exactly be a surprise, either, given the power demands of the existing Core i9-9900K as it is, and the fact that Intel will surely be struggling at this point to squeeze more performance juice out of continually refining 14nm.

Still, perhaps this sighting of the 10900K means that the Comet Lake desktop range won’t be as delayed as the rumor mill has recently been indicating – which is definitely important for Intel given that Ryzen 4000 is on the horizon, promising a major performance uplift, possibly to the tune of 20%.