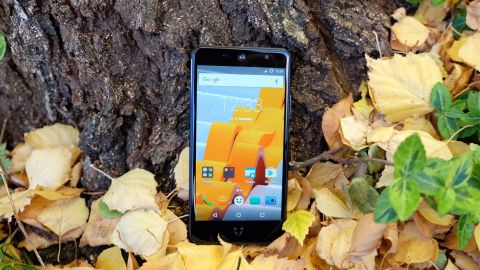 Wileyfox has bumped up the battery capacity of the Swift 2 Plus since the original Wileyfox Swift, from 2500mAh to 2700mAh. Rather than massively improving battery life, however, the phone appears to be treading water.

We weren’t exactly disappointed with the Wileyfox Swift 2 Plus’s stamina, but nor were we at all impressed. About the best result we got was in the early days of usage, just before we switched to using it as our daily driver.

This scenario involves what we’d call light usage, with minimal screen-on time and only a little light gaming and web browsing to really strain the battery. On such an occasion we managed to get from 11am to 11pm using just 48% of the battery.

Naturally, when we started using the phone properly - if moderately - for regular messages, calls, emails, and a few snaps, the performance dropped. On one particularly long day we took the phone off charge at 8:55am, and received a 15% battery warning at 10:05pm. It died completely at 12:20am.

This was a little disappointing, but not downright poor. The phone’s underwhelming battery performance was reflected in the regular TechRadar battery test, which involves playing a 90 minute 720p looping video with the screen brightness cranked right up. On average, we found that the test took up 24% of a full charge.

If you do struggle to make the Swift 2 Plus last, there is at least fast charging through Quick Charge 3.0. Using an appropriate high capacity plug, we managed to get it from 15% to 65% in an hour. It then took a further 30 minutes to get to 91%. That’s pretty speedy, though slower than Wileyfox’s claims of being able to go from 0-75% in 45 minutes.

All in all, the Wileyfox Swift 2 Plus’s battery life is far from impressive, but it should get you through a day of usage if you don’t strain it too much.

If there’s one place it’s impossible to hide your phone’s price tag it’s the camera. There are just too many sophisticated, pricey camera components in a modern flagship, and it’s impossible to take shortcuts without a loss in photo quality.

Given such limitations, the Wileyfox Swift 2 Plus copes admirably. Its main shooter is a 16MP example with a Samsung 3L8 sensor, and in decent, balanced lighting it’s capable of some genuinely strong results.

Most affordable phone cameras produce washed out, flat photos, but we found that images from the Swift 2 Plus had genuinely punchy colours and decent detail. Shots were fired off quickly, and the autofocus was reasonably effective.

It shouldn’t surprise you to learn the two areas in which the Swift 2 Plus camera falls down: low light and dynamic range.

Low light shots were universally blurry and noisy, while indoor shots with moderate lighting were also noisy, but brightness and colour reproduction were actually pretty decent.

Give the camera any kind of balance of shade and light, however, and it simply can’t cope, leading to either blown out bright sections or extremely dark shade. There is no HDR mode to even attempt to compensate for this.

Still, as we say, our expectations for a cheap smartphone camera were generally exceeded thanks to those punchy colours and snappy, fuss-free performance.

You also get a better-than-expected 8MP selfie cam, if that’s your thing. Video capture is Full HD, which again is just fine for a phone of this price.

Prev Page What's it like to use? Next Page Verdict and competition