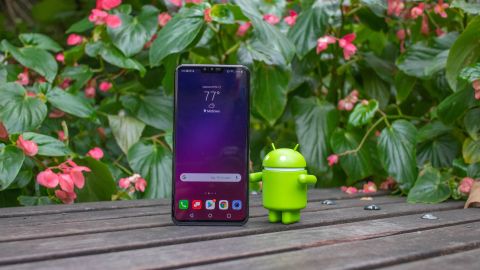 The LG V40 is ready to take your photo – five times over. Its ludicrous five cameras are actually really helpful, and the star feature of this smartphone. They’re the key reason to consider the V40 over other handsets, so let’s break all of them down.

Primary rear camera
The best photos come from the 12MP standard camera, which captures what’s in front of you with a typical 78-degree field of view. An iPhone has a slightly tighter FOV of 73 degrees, but Android phones tend favor squeezing in more content as opposed to Apple’s more intimate approach.

This lens has a fast f/1.5 aperture to pull in more light, and the size of the pixels, or photosites, on the sensor is larger than is typical at 1.4 microns, improving the light-gathering capabilities of the sensor; combined, these two features offer improved performance in low-light situations. LG’s Super Bright Camera tech is also here, offering a mode that amps up the brightness in dark environments, but cuts the normal resolution.

LG says its camera prioritizes people’s faces in backlit situations, which is exactly what we saw in photos when putting it up against the likes of Samsung and Apple phones. This is also why we saw more blown-out backgrounds from LG’s camera, even with HDR mode enabled. Yes, it can take multi-frame photos that combine four frames into a single image, but LG’s camera favors single-frame photos whenever possible to reduce motion blur.

There’s also aggressive use of contrast here, with photos skewing toward deeper reds and yellows compared to the fierce competition. With the Pixel 3 and Pixel 3 XL around the corner, you may want to wait to see what Google has to offer given the excellent cameras on its previous phones.

The resulting 16MP photos from this f/1.8 lens gives you better context of scenes. You won’t have to back up… back up… and back up some more in order to take the shot you want, or resort to stitching together a panoramic photo. The wide-angle effect works, but we did notice blurry and soft edges in the corners of most photos we took. You’re not getting OIS on this super-wide camera, and it’s noticeable. Often, it's enough to render the otherwise cool effect moot because it's so inconsistent.

Telephoto rear camera
New to the LG V series (or any LG phone) is a telephoto lens, the optically zoomed-in camera idea we’ve seen from Apple, Samsung, and others. You’re able to get twice as close to subjects without distortion when digitally zoomed in. Or, at least that's the idea. The problem is that almost every telephoto picture we took wasn't sharp in normal light, and downright blurry in low light.

Update: Interestingly, we found that low light photos while using the telephoto lens actually use the normal camera lens and just crop the image. We can tell this because the EXIF details prove it uses the f/1.5 aperture of the normal lens. Apple and Samsung do this with their telephoto lens, so it's fair. Things end up being less blurry with a faster aperture at nighttime.

Plot twist: any photo we took using the Triple Shot mode (which cycles through all three cameras) forces the telephoto lens to be used, even in low light situations. Hence, blurrier-than-normal shots. The logic here doesn't make sense. It's either a flaw or poor planning.

The 12MP photos from this f/2.4 telephoto lens offer a tighter 45-degree FOV. Truthfully, 2x optical zoom isn’t as dramatically close as you’d expect (that’s true of Apple’s and Samsung’s telephoto lenses, too), and we found that focusing on subjects could be a hit-or-miss affair, often depending on the amount of light. We appreciated the effect – but the Huawei P20 Pro goes a bit further with its 3x optical zoom, and that seems like the next step for LG and others.

This f/1.9 lens with an 80-degree FOV is capable of taking portrait photos, and while it’s not our favorite among selfie shooters, it’s a huge step in the right direction for LG. Just be sure to turn beauty mode off.

It’s an effort to reduce barrel distortion in your selfies, but it does limit the cool effect of capturing epic group selfies, with everyone in the frame and everything that’s behind you. The human eye has a roughly 120-degree FOV, and while we did see barrel distortion at the edges of V10 photos three years ago, LG has chosen to play to safe with the V40’s FOV, and that's a bit disappointing.

Triple Lens, Portrait, Cine Shot, and Cine Video
The LG V40 has an AI camera that does a fairly good job as guessing your subject (flower, city, person, and so forth) and adjusting the finer settings (white balance and brightness) accordingly. But for some reason, it’s in a secondary menu on the camera where it’s easy to miss.

Triple Lens takes all photos from all three rear cameras (in a row, one after another). It’s a great way to capture a moment without worrying about which camera would be best. You’ll want to keep your camera still for the four seconds it takes to cycle through all three cameras since two of the three rear cameras lack OIS.

Portrait photos did an okay job for us on the LG V40. There’s a healthy amount of blur in the background, though you’ll notice the blur drop into foreground subjects, especially around their hair. Our biggest issue here is that we found more blown out backgrounds in this mode.

Cine Shot is a fun cinemagraph mode that allows you to create partially animated photos from the default camera. It does this by capturing six-second MP4 video, presents you with a frozen image, and enables you to paint over what portions you want to see stay in motion. We tested it using a record player that’s still in motion and against yellow taxi cabs in New York City. Being able to zoom in to paint over what should be animated is helpful (the Moto Z3 Play and Moto Z3 don’t allow this), but we were disappointed that you can’t redo the paint job or switch between loop and bounce animations after you save the cinemagraph. This also means that you can’t import old videos to get cinemagraph treatment. There are Google Play Store apps that do have the same functionality.

Cine Video returns with an even easier way to fluidly zoom into video anywhere, not just the dead center of the screen. There’s a new tap-to-zoom function in which you just point to the area of the screen you want to zoom into. Don’t worry, we also found that tapping and using the slider bar still works to zoom into our color-rich 4K UHD video.