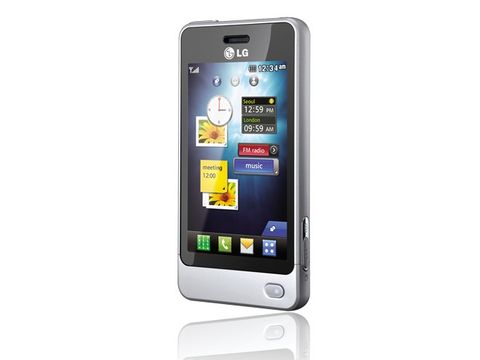 A decent device for those on a budget - but you do very much get what you pay for.

Aimed at mobile buyers after some touch control action on a budget, the LG POP GD510 is the smallest, lightest and one of the cheapest 3-inch touchscreen phones around. After LG's success with the cash-conscious Cookie KP500 – which notched up over 10 million sales in just over a year – LG must be hoping for similar things from this stylishly slimline device, which at launch is selling for under £100 on a pay as you go package.

The LG POP GD510 doesn't try to be a do-everything smartphone. The POP is instead pitched at delivering a fun package, with a friendly user experience and the sort of features its target audience are after.

Like the LG Cookie and Samsung's highly successful Tocco Lite low-cost touchscreen phone, the LG POP doesn't do 3G connectivity, relying instead on quad-band GSM with GPRS/EDGE data connections for any online activities. The success of other budget touchscreen phones suggests that may not be a big issue for the POP's prospective buyers.

The LG POP operates on LG's A-Class user interface (essentially a slightly altered version of LG's S-Class system on the likes of the Arena and Crystal), so you get plenty of eye-pleasing icon graphics and finger swiping screen switching effects. This will be what grabs off-the-shelf interest more than any head-turning features or cutting edge application technology

The set of features offered is reasonable for this grade of handset though not eyebrow-raisingly exceptional, with tick list essentials such as music and video players, a 3-megapixel camera, email support and FM radio covered. Unsurprisingly, you needn't look for Wi-Fi or GPS, but there is MicroSD card expansion (up to 8GB cards are supported) to bolster the POP's modest 40MB of internal user storage. Also, there's the option of adding a solar-cell powered back panel as an alternate power source.

The design of the LG POP GD510 is certainly a draw. The bodywork is elegantly slim and compact – it measures 97.8(h) x 49.5(w) x 11.2(d) mm and weighs just 87g. That size helps give its 3-inch screen more prominence, particularly as the front panel features an ultra-minimalist single physical button for interacting with the UI. This Smart Key acts as a Call/End/Clear/Back button all in one, adjusting role dynamically as required. In practice it works effectively and you don't miss the usual keys.

The casing around the screen has a matt silver finish with a splash of chrome here and there, and feels reasonably robust for a lightweight handset.

Buttonry is again kept to minimum. The power button on top doubles as a lock-key with a short press, while the camera button on the side also has a dual role, a quick tap of it pulling up a grid of favourite applications onscreen. This can be easily configured to your own requirements, as can much of the onscreen shortcut and quick key options.

Volume/zoom keys are in place too, and there's a single microUSB socket for charger, earphones and data hook-up to a PC.