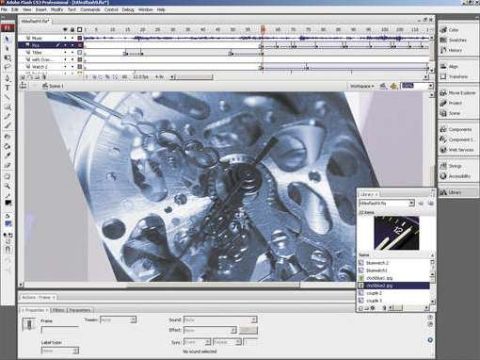 The Flash interface has had a thorough cosmetic overhaul

Adobe have delivered a more compact, streamlined and powerful package with this version of Flash

Almost two years ago, with much wailing and gnashing of teeth from the web design community, Adobe acquired multimedia software developer and rival Macromedia. Flash was the pinnacle of its portfolio but now it has the Adobe badge on the box, proving to be quite a coup for the company. But can it capitalise on its investment now that it's in charge of Flash's development?

After all, Adobe has tried to enter the multimedia application authoring and animation market once already with Adobe LiveMotion. Well, right now it's looking good for Adobe. The Flash interface has had a thorough cosmetic overhaul, bringing it into line with Adobe's other tools. There's also a restyled dock, which can be enabled using the Workspace submenu.

With icons representing all Flash's major panels, these can now be easily accessed and hidden, giving you more space for serious development. The Flash stage needed some extra room. Past outings have added much more functionality to the package. This time around, the concentration is on workflow, integration and the consolidation of existing features. The result is a more intuitive version of Flash.

Take, for example, the live graphic Filters that were introduced in Flash 8. In the new version you can copy and paste filter settings from one symbol to another. Animation has been enhanced with a similar feature. With a right-click on the time line, you can select tweened animation rules, copy them and reapply them to other objects. You can even convert tweened animation to resource saving ActionScript using this feature.

Flash started its long and eventful life as a vector sketching package for graphics tablets. This explains some of the unique behaviours of its drawing tools - some welcome, others less so. Thankfully, Adobe has revamped the Pen tool and it now works more like its analogue in Illustrator and Photoshop. As a result, Bezier curves are much easier to work with.

Rather than replace the program's eccentric shape tools, which have a charm all of their own, Adobe has added some new ones. You can now create standalone rectangles and ovals with the Primitive shape tools. Each shape you create is a discreet, editable object - in contrast to the sticky, default grouping behaviour of regular shapes in Flash.

Making shape and symbol selection easier is definitely a theme this time, with colour-coded bounding boxes making their debut. If you've ever tried picking a single vector element or text object out of a busy Flash stage, you'll appreciate the wisdom of this feature.

We've been expecting ActionScript 3.0 support in Flash CS3 since the release of Flash Player 9 in June of 2006. It's up to 10 times faster than ActionScript 2.0 and has simplified event handling plus many new classes dedicated to creating rich applications. Now the script assistant in Flash CS3's Actions panel has been updated so you can program using this ECMAScript compliant language.

Unfortunately, you can't switch between ActionScript 3.0 and legacy versions at will, but you can edit older files or create new ActionScript 2.0 movies from scratch. Every pundit and his pooch have been expecting better integration between Flash and Photoshop, and they won't be disappointed. There's improved support for the entire CS3 tool set with Adobe Bridge asset sharing and Version Cue team working and version tracking tools.

Photoshop files can now be imported direct to the stage with very little preproduction. Text layers can be brought in as text, vector shapes as editable paths. Using new import dialogue you can bring in files direct from Illustrator too. You have access to the settings for each individual layer when you import and can choose which elements to add to your movie.

This apparently small change will enable designers to take full control of Flash interfaces - and by extension, the web applications that Flash is capable of creating. On the surface, Adobe Flash CS3 looks like a conservative upgrade. The main improvements are in workflow and tool use. ActionsScript 3.0 is a big leap ahead for developers, but it was telegraphed with the release of Flex 2.0 some months ago.

That said, the cumulative enhancements in Flash CS3 make this a streamlined, but more powerful, version of a classic package. All in all, an essential purchase for current converts and all forward- looking web developers.