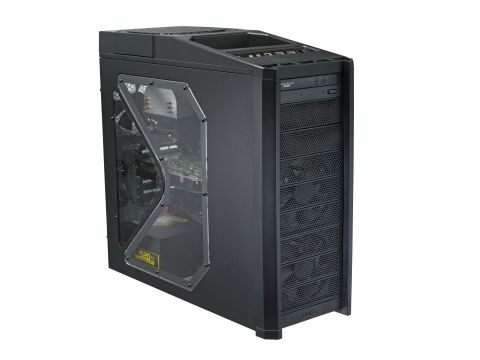 A seriously desirable machine. This is the way mid-range PCs should be made

Is it really too much to ask for an affordable gaming system built from carefully selected components from a major UK PC manufacturer? You know, the sort of system a clued-up enthusiast might cobble together if they were given a similar budget to play with. A gaming rig that offers real desirability and style, in other words.

Until we unsheathed the Yoyotech Intel Viper, we had begun to suspect that was the case. After all, all the other systems we've looked at recently have been uniformly bland and joyless despite delivering the goods in terms of raw performance.

Not the Yoyotech. This is a gaming PC that impresses in just about every way. For starters, it's the only system here with a genuinely sexy chassis in the shape of an Antec Nine Hundred. Indeed, it's not just a snazzy looker, it's extremely effective too, thanks to oodles of cooling capability and even an external fan speed controller. That's a nice additional touch.

Moving inside the chassis, this rig is also unique among all the PCs included in this test in sporting both a high-quality CPU cooling solution and what we would describe as a kosher power supply unit.

Sure, the latter is only rated at 520W, but it's a quality Corsair unit that we're confident will outperform cheaper models with higher headline power ratings. It's a similar story with the system memory.

The Corsair XMS 2 Extreme DIMMs break from the budget norm and offer both better timings and clamp-on heat spreaders for improved overclocking. You can look long and hard inside the moody Antec case, but you simply won't find a duff component.

Elsewhere, the Yoyotech matches the other systems in most regards. There's 320GB worth of disk space, a 2.66GHz Core 2 Duo processor and a Geforce 8800 GTS in 320MB trim.

Chipset-wise, the Abit IP35 motherboard is powered by Intel's latest mainstream offering, the P35. For now, it's not clear whether it will support Intel's upcoming 45nm processors, due out at the end of the year, but if any currently available chipset can, this is it.

As for performance, suffice to say that of 20 benchmark results, the Yoyotech was unbeaten in 12, with particularly impressive results in both Half-Life 2 and Company of Heroes. It even managed to spank the opposition comprehensively in our Oblivion level load test. To us, that simply says this rig is sorted.

The fact that Yoyotech has chosen to go with a crisp and clean Vista installation entirely free from pre-installed gunk certainly doesn't hurt.