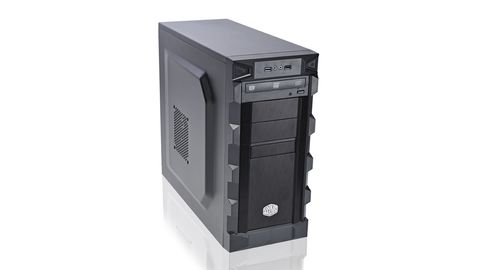 Thanks to modern CPUs and their fancy pants integrated graphics cores, even the thriftiest of machines can now play games. We say fancy pants, but for real gaming, you can drop the fancy bit.

CPUs may get better with each generation, but they can't touch a discrete graphics card when it comes to proper gaming. Thankfully for us all, AMD and Nvidia have been clawing away at each other again recently to see who can produce the best pixel-pusher at this end of the price spectrum.

This fighting has resulted in some great hardware, to the point where there's a new king of budget gaming hardware: the GeForce GTX 650 Ti Boost. This is the graphics card you'll find thrumming inside Aria's Gladiator FX Predator budget gaming system.

A powerful graphics card is vital for any gaming rig, but the processor is also important. Here Aria has opted for AMD, with the FX-6300 handling the hard work. This 3.5GHz chip turbos up to 4.1GHz and has six nominal cores. It can't quite keep up with Intel's finest, but it keeps the overall system price down and is powerful enough for modern gaming.

The core components are strong, but what about the rest of the system? One thing that usually gives away a budget machine is its chassis, with many builders baulking at the concept of throwing cash at the case. Aria has bucked the trend though, and this Cooler Master K280 is a fine box. It mimics the industrial styling of the wonderful HAF, although to be fair it's not quite as solid, and it doesn't have a sexy side window either.

A pair of USB ports (one USB 3.0 and one USB 2.0) and audio jacks can be found at the top of the fascia alongside the power and reset buttons. Pop the side panel off and you'll find plenty of space for expansion thanks to the neat routing of the existing cabling.

There's room for more storage to compliment the 500GB hard drive and 64GB SSD that are installed by default. The combination of a speedy SSD for the OS and a decent amount of space for your games is a good and balanced choice, especially in a budget PC. This, along with the use of big name components, goes to show just how far even an entry level budget will stretch when it comes to building a gaming machine with some serious clout.

A quick word on the bundled keyboard and mouse: they're awful. They feel like the sort of things that fall out of cheap Christmas crackers. Replace these as quickly as possible and you'll have a much better perception when it comes to the quality of the system.

We've had a few budget systems through the labs recently, each boasting a different collection of components, but none offer the same value as this one. Aria has built a quality PC here, with strong performance, solid component choice and good build quality, all at a really great price.