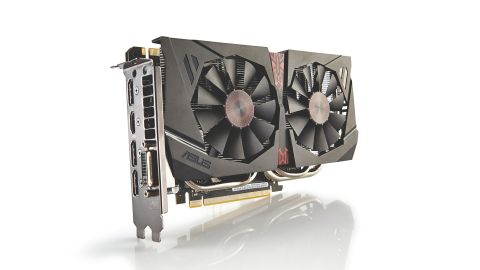 The ornithologically themed STRIX line gets the mid-range Maxwell treatment

A quality little version of Nvidia's GTX 960 with an absolutely outstanding cooling array attached to it.

As there are no reference versions of the new GTX 960, it's all up to the manufacturers just how far they go with their cards. Nvidia has put out its own guidelines for base and boost clocks, but that's all they are.

Because of that, the GTX 960 has spawned a glut of factory-overclocked cards being first out of the gate. But is that really where the sweet-spot lies for Nvidia's mid-range Maxwell?

As is its wont, Asus has released an owly version of the GTX 960 under its STRIX branding, replete with the always-impressive DirectCU II cooler.

Again though we didn't see the card at those frequency points once during testing. Our sample was instead intent on rock-solid gaming at 1,354MHz.

That shows just how much overclocking headroom there is in the GTX 960.

Though the fact that the EVGA GTX 960 SuperSC version is clocked even higher, yet still posts incredibly close gaming frame rates, does mean there's not really any great advantage to running at these speeds.

But there's almost no reason not to.

Temperature isn't really an issue, especially with the formidable cooling that Asus has layered on top of its GPU. The DirectCU II cooler on the STRIX kept our review sample running at its top overclock at only 58ºC, considerably cooler than the ACX 2.0+ cooler on the EVGA SuperSC version.

Likewise noise isn't a problem either.

The STRIX's fans only spin up once the GPU reaches 55ºC, which means that on your Windows desktop the card is running entirely on passive cooling. And again those fans are incredibly quiet when they do get going.

Too cool for school

So, why wouldn't Nvidia set its recommended clocks higher?

Mostly for reasons of marketing and allowing its partners to charge that little bit more for overclocked iterations of its cards. After all, having huge overclocking figures on the packaging is a good sell for both Nvidia and the card makers.

Thankfully prices on Asus' GTX STRIX 960 have dropped quite considerably since launch. At the beginning the fact it was so much more expensive than the competition, and yet no faster, was a bit of an issue.

Now it costs less than EVGA's GTX 960 SuperSC card which makes the fact it's a tiny bit slower in our gaming benchmarks less of a problem too.

It's not able to match the EVGA card's heady overclocking performance - even with the excellent Asus cooling - but when the extra MHz don't translate into extra FPS we can forgive that slight mismatch.

Our card tapped out at 1,478MHz, even though it was still only whispering away at some 58ºC.

But this is the real triumph of the GTX 960. No matter how relatively underwhelmed we've been with the mid-range Maxwell's overall performance, Nvidia has made a card where 1080p performance has been utterly nailed in a relatively small form factor and where noise, power and temperatures have all been rendered complete non-issues.

When such overclocked cards as the STRIX GTX 960 had hefty price-premiums attached to them it they didn't look so appealing. The GM 206 GPU doesn't really need the might of the DirectCU II cooler to achieve cool and quiet performance.

But now the prices aren't nearly so high the super-cooled, super-quiet Asus cooling array makes for an excellent choice of GTX 960.

The biggest strength of the Asus STRIX GTX 960 OC Edition is that powerful cooling array attached to it. It stays silent until the GPU hits 55ºC and even then you'll be straining to hear it.

We're also mighty impressed that prices of this premium card have dropped so much since launch, making it a much more tantalising a prospect for the mid-range upgrader.

There's also the fact the Asus card is really quite tiny. For a small form factor machine it really is worth a look.

We're still not massively excited by the GM 206 GPU. It does essentially all it needs to do to perform at this level, but nothing more. The 2GB frame buffer isn't going to provide any sort of future proofing so it really is just a 1080p card for today.

The Asus STRIX GTX 960 is a seriously quiet, incredibly cool little mid-range graphics card. Now that the prices have dropped this card is really vying for top GM 206 honours.