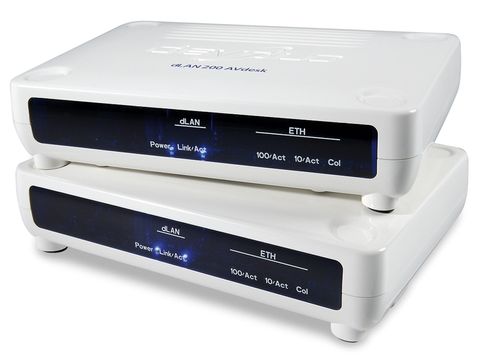 While the throughput doesn't match the hope, it's still good enough for streaming HD content

Powerline networks have traditionally been a niche solution, but the latest releases hope to push the concept further into the mainstream - with speed being the key factor. First we had 14Mbps networks, then 85Mbps, and the latest upgrade from Devolo pumps this up to a quoted 200Mbps and introduces numerous features to make the resultant network better suited to video streaming.

It's wise to start by dispelling the idea that you'll ever see 200Mbps. Apart from limiting the connection to the PC/modem to a 10/100 Ethernet, the various overheads and power line deficiencies mean that the theoretical maximum is less than 100Mbps, while in reality, you're more likely to see less than 60Mbps. In tests, we witnessed sustained throughput of between 30Mbps and 37Mbps, with little real variation, whether we were using plugs close to each other or not.

The package includes two adaptors and a pair of Ethernet cables to get your network up and running, without the need for additional hardware. Installation is fairly simple for direct machine-to-machine connections, although it's more complicated if you're going to connect one box straight to your router.

Networks can be configured to only connect to specific adaptors, allowing you to create fairly complex setups, although this is all defined by the Security ID on the bottom of each adaptor, which can be frustrating for the first setup. 128-bit AES encryption is at the heart of security, which should allay any fears about the integrity of your network.

A small collection of applications is installed from the supplied CD, which include a wizard-driven utility for configuring the network, and EasyShare - a simplistic but useful interface for copying files from other machines on the network. It can also be used for chatting with members on the network, although the real-world usefulness of this is up for question. Still, it all works with the minimum of fuss.

This starter kit isn't cheap, and additional boxes will set you back a further £80. However, as a means of extending your existing network, it's impressive enough, and while the throughput doesn't match the hope, it's still good enough for streaming HD content. Alan Dexter