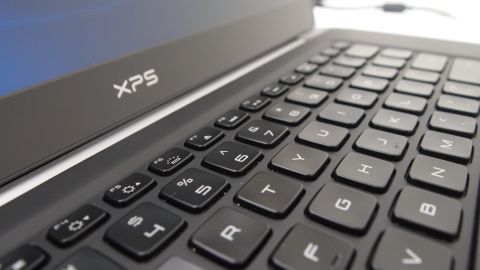 Dell's XPS 13 has been one of our Ultrabook darlings for months, but it's now joined by two other siblings - the XPS 14 (which is available in an Ultrabook configuration) and the Dell XPS 15.

The XPS line has certainly come of age this year and these new models really point the way forward for Dell's laptop strategy. However, while the XPS 13 represented real design innovation, these two new models do remind us of the MacBook Pro.

If you think we're being a little harsh, take a look at this photo of the top:

And the side. Perhaps it's the aluminium and magnesium finish, but we think buyers will think they're rather similar too.

And it's a little bit of a shame, because the XPS 14 and XPS 15 have a lot to shout about. The XPS 14 is only a little thicker than Apple's new retina Display MacBook Pro at just under 21mm. Dell really has got to grips with design these days and it's producing some of the smartest portables around. See what we mean in the next few shots.

As you can see, the XPS 14 doesn't have an optical drive, though the bigger XPS 15 does. There's an SD slot in the side instead.

There's also an option featuring a 3G mobile broadband slot - this has a leather-backed lid for better reception. It looks smarter than you'd think. Apparently this model doesn't conform to the Ultrabook standard, presumably because of the chipset used. It's also around 2.5mm thicker than the non-3G model.

Here's the underside, which matches that of the XPS 13. Spec-wise, the XPS 14 features various Ivy Bridge Intel Core processors up to Core i7-3517U. Most models will have the Intel HD 4000 graphics as standard, though the 1GB GT 630M from Nvidia is available as an option.

The XPS 14 uses the same smart-yet-comfortable key design as the XPS 13 and has a smooth glass trackpad. In use, we found this to be a little sticky for our liking, though we're sure we'd get used to it. There is some capacity for gestures, but expect these to work a lot better when you upgrade the XPS 14 to Windows 8.

By the way, Dell calls it a 'chiclet' keyboard - not sure why - and it's spill resistant. It's also backlit. We find these keyboards very comfortable to type on.

The screen is pin-sharp and is extremely bright at 400 nits - the XPS 14 features a 1600 x 900 display. Dell's newer displays have been very good indeed and we liked that on the XPS 13.

As for memory and storage, you can choose from either 4GB or 8GB of RAM, while it looks like storage will come in two options - a 512MB SSD (which pushes the price into the expensive bracket at £1,579) in addition to a 32GB SSD plus 500GB hard drive (annoyingly this remains at the slow 5,400rpm speed rather than 7,200rpm).

Dell cites an 11 hour battery life from the 8 cell battery inside the XPS 14, though we'll have to see this when we test the laptop properly. It looks like the battery isn't able to be got at by the user, which is annoying for those who often swap out laptop batteries.

You also get the usual array of ports including two USB 3.0, HDMI and Ethernet. Dell is also a big fan of Display Port for business, so you get a mini Display Port connection as well.

We thought the XPS 13 was brilliant, but it had one problem - screen real estate. The XPS 14 solves this and is a really rather fine laptop. The XPS 13 wasn't the cheapest Ultrabook around and neither is the XPS 14, but we're really looking forward to seeing this one again for our full XPS 14 review.