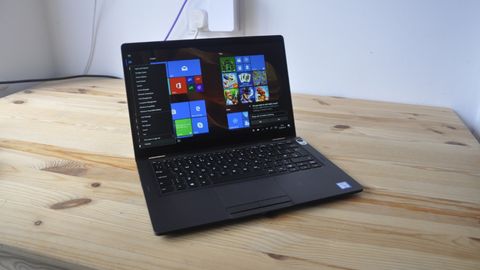 A powerful 2-in-1 system that delivers the latest Intel technology in an interesting form-factor. Surprisingly, it’s upgradable if you need more storage or RAM. Battery life could have been better, but it isn’t dire.

We’ve seen plenty of 2-in-1 designs that try to emulate the Microsoft Surface. The downside of doing this is that many of them aren’t practical replacements for either a dedicated tablet or a laptop.

These devices often lack a good enough keyboard or have poor battery life. Or they suffer other limitations that are bound to irritate anyone trying to get some work done on the machine.

From the point where we unboxed the Dell Latitude 5300, we realized that this 2-in-1 hasn’t fallen into many of the most obvious design traps for convertible systems.

Dell has delivered an interesting design that offers a tablet capability without undermining the laptop side of the equation. Let’s take a closer look at the areas where Dell’s engineers triumphed, as well as examining those bits which still need some work in this Latitude convertible.

As was the case with our last Dell laptop review, the manufacturer supplied a sample machine that it isn’t possible to buy in the UK. However, a model with an almost identical spec (other than having 16GB of RAM) is on sale costing £1,139 + VAT.

American customers get a much wider choice of 5300 class machines, with eight different models versus just three in the UK. The US options also don’t include the exact spec of the review hardware, but a similar system using the same CPU, with 8GB of RAM and the same storage, costs $1,429.

The new Latitude 5300 joins the existing 5290 model in the Latitude 5000 series, improving on its predecessor with a bigger display (13 not 12.3-inches) and more modern Intel silicon.

In the UK, three models are available, all sporting 8th-generation Intel processors, with two Core i5 options and a single Core i7 machine.

The review machine is the middle child in this family, built around the Core i5-8365U CPU, and it comes with 256GB of NVMe SSD storage.

The outward appearance is practically identical to any other 13-inch business laptop, with a centrally located touchpad, and all the ports being placed on the left or right-hand edge of the chassis.

On the left you’ll find a single USB Type-A port, a USB Type-C connector, HDMI out, proprietary power port, and on the review hardware there was a smartcard reader (but that’s optional).

The dedicated power port was completely redundant on the review model, because the external PSU is of the Type-C variety, and it uses that port to charge.

The left side plays host to the audio jack, a microSD card slot, another Type-A USB port and a Noble Lock point. Another optional feature on the left is a microSim for mobile phone communications.

While we welcome the addition of a Type-C port, the fact that this machine only has the one does relegate its usefulness without a docking station, since it is the only way to charge or directly power the machine.

Depending on which Latitude 5300 you purchase, this Type-C port can either be a USB 3.1 Gen 2 or a Thunderbolt 3 port. Although whatever variant you have these ports support Power Delivery and DisplayPort over the interface.

One other interesting feature visible from the front is that the power button also doubles as a fingerprint reader, although we found that when we used this to turn on the notebook, it seemed to slow down the process.

Furthermore, we quickly noticed that when the machine is in any of the other modes aside from laptop, the power button and fingerprint reader is either facing away or is underneath the machine. In other words, it’s only conveniently positioned when the Latitude is in laptop mode.

However, switching to tablet or tent mode produces other issues, as we shall see…

The party trick that gives the Latitude 5300 its 2-in-1 status is reasonably well-hidden, and that’s the double-jointed hinge that allows the screen to be folded back until it comes under the chassis to facilitate the transformation into a tablet.

The first time we did this we genuinely thought we’d accidentally broken the machine – as the screen does not sit flush with the underside of the main case when folded back.

Further investigation revealed it wasn’t wrecked and that both the keyboard and parallel screen surface are very slightly curved. And when you face them in opposite directions, these parts inconveniently curve away from each other.

This is a very odd design choice, and it concerned us for a few good reasons. One of those being that in tablet mode the screen is only supported in a few small places. Another issue is that as the screen is convex, laying the tablet face down on any surface puts pressure on the top and bottom edge, leaving the middle of the display unsupported.

We didn’t dare to find out what level of pressure would be needed to break the display, but we’d strongly advise anyone with this machine to never test those limits by placing it screen-down, ever.

In tablet mode the machine is 22.44mm thick, making it much chunkier than any dedicated tablet. If you’re wondering, the keys don’t retract into the case to help make it any thinner.

With the majority of its full 1.43kg weight in the case, the machine is very stable for typing on in laptop mode, but by tablet standards, it is on the heavy side.

The final aspect of tablet mode that should be reconsidered is the border of the touch display. For a tablet screen, it is very narrow, especially at the sides.

If you use an application that expects you to swipe off the display easily, this machine could have issues with doing that, given the almost negligible space beyond the visible screen.

Here is the Dell Latitude 5300 configuration sent to TechRadar Pro for review:

The spec of this 2-in-1 makes for a relatively powerful platform that should be capable of most mobile computing tasks without breaking a sweat.

Where it could be better is with the GPU, as the Intel UHD Graphics 620 is looking decidedly dated when compared to the integrated video capabilities of AMD, or the discrete options Nvidia offers these days for the mobile sector.

Therefore, we wouldn’t recommend this machine for anyone who needs to partake of 3D rendering regularly.

Another possible sticking point comes with the USB ports, which might seem an odd complaint as the Latitude has three of them. However, it’s the mix of those ports that could be better, as you get two Type-A and only one Type-C, and that doubles as the charging port.

With a commitment to Type-C charging – meaning that if you’re charging, or have the laptop plugged in, there’s no available Type-C port – this machine should have had two Type-C and a single Type-A port.

One difference we noticed between this and its Latitude 7200 sibling is that this device comes with a 60W PSU, and the 7200 only has a 45W supply.

Battery capacity on the 5300 is marginally greater with a triple-cell 42Whr battery, and not the dual-cell 38Whr that the 7200 runs with.

Both have an ExpressCharge capable battery, but with the larger capacity PSU this model charges quicker, and it also lasts longer than the modest Whr difference might suggest.

With Intel’s latest mobile silicon, an NVMe SSD and plenty of RAM, the 5300 runs very sweetly.

There is plenty of performance in reserve that can be brought into play for those who like to multi-task between several demanding applications.

Here’s how the Dell Latitude 5300 performed in our suite of benchmark tests:

Compared with the Dell Latitude 7200, this system produced slightly lower benchmarks with an identical CPU and chipset. The difference is tiny, and most users wouldn’t notice that this device was a little slower at CPU intensive tasks.

What helps redress the balance is that the SSD in the Latitude 5300 is much better than the one used in the Latitude 7200. It’s a whole 1GB/s faster at reading, although a little slower at writing.

With a read performance of 2,770 MBps, Windows boots rapidly and applications launch swiftly when required.

Battery life isn’t anything special, but it will last more than four hours of continuous use. A full day’s work is probably tricky, irrespective of screen brightness, but you can charge the battery quickly if you have mains briefly available.

The only negative in the performance column is the previously mentioned integrated GPU, and in benchmarks that test graphics performance, the 5300 doesn’t break any speed records.

If you can ignore Intel’s old graphics technology, the Latitude 5300 is an excellent performer that is easily as good as most desktop systems.

We recently covered the Dell Latitude 7200 2-in-1 and discovered that the memory on that machine was soldered to the mainboard, and also, it uses an unusual M.2 slot for storage – so we feared the worst when opening up the 5300.

There was no need to be concerned, as it turned out, because the extra space offered by the more conventional Latitude 5300 chassis allows for relatively easy upgrades that any competent IT person can attempt.

The DDR4 memory is slotted, with two available slots allowing for a maximum of 32GB of RAM potentially.

It also has a single M.2 2280 slot that could take an SSD of up to at least 2TB capacity – and possibly bigger. The only caveat to that upgrade is that an image of the existing drive needs to be made to reinstall once the new drive is fitted.

We wish to see more machines like this one, rather than the seriously hampered 7200, in respect of upgrade options.

Compared with the former two machines, the Latitude 5300 looks a little expensive for what it offers, and we can only hope that Dell makes it more competitively priced in the future.

The Dell Latitude 5300 gets many things right in providing a system that offers a tablet capability without making the device much less useful as a laptop.

Where the Latitude 7200 is a tablet that can also try to be a laptop, the 5300 is a laptop that will be a tablet if you want that, although doing that comes with several ergonomic caveats that we’ve discussed already.

Given the usefulness of a Windows laptop versus a Windows tablet, we think the 5300 got the balance right. Because the number of times this is likely to be a useful laptop will for most users outweigh any tablet use significantly, in our opinion.
Those who want a Windows tablet, for whatever curious reason, should pick the Latitude 7200, Microsoft Surface or some other tablet-centric design.

If conversely you use tablet or tent mode occasionally and want a useable laptop the rest of the time, the 5300 might be ideal for you.

Our only real concern about this design is the slightly curved screen, and how that might survive the level of abuse that most business machines are forced to endure.
That might be the weak link in this chain, and a replacement panel from Dell isn’t likely to be a cheap replacement part.

The best alternatives include the Lenovo ThinkPad X390 which has a much bigger battery and a Core i7 processor for a similar price. Also consider the Acer Switch 7, a machine that uses previous-generation Intel chips but gives you an Nvidia GeForce GPU for less money.

Finally, we should mention the Microsoft Surface Pro 6. However, this system costs more, has inferior hardware, zero upgrade options, and doesn’t include a keyboard as standard (the Type Cover costs extra).