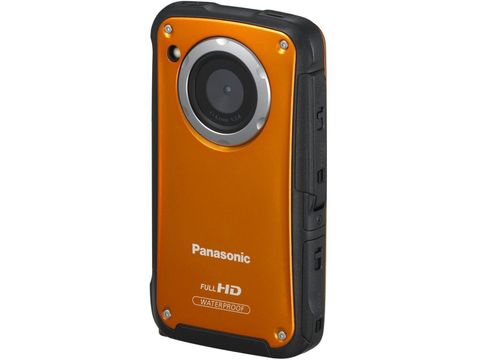 The HM-TA20 is a waterproof pocket camcorder

Despite the fact that Cisco recently killed off its Flip line of camcorders, other manufacturers are keeping the point-and-shoot video camera legacy alive.

Panasonic is doing its part with the Panasonic HM-TA20.

It's a waterproof and shockproof video camera capable of recording Full HD footage, as well as eight-megapixel still images.

With its bright, chunky design, it's intended as a kind of holiday camera you use anywhere and chuck in a bag with a wet towel and sandy shoes, without having to worry about it.

It can record footage in 1080p, 720p and 480p, all at 30fps. It records in H.264 MP4 files to an SD/SDHC/SDXC card, with audio in two-channel AAC, except for the lone audio recording function, which uses LPCM for maximum quality.

The waterproofing is rated for down to three metres, while you should also be able to drop it from 1.5 metres without incident.

There's an LED flash, which can also be used as a video light, but it's notable only really for being weak. It won't make much of a dent on a dim room, let along a black cave.

You start recording using the big red and silver button on the back, but almost all other functions are performed using the three-inch touchscreen. It's resistive, which means that it's nowhere near as responsive as the touch panels on mobile phones, but this is necessary trade-off - capacitive touchscreens don't work well (if at all) in water.

You have to hold the TA20 upright to record, which is a little annoying, since it restricts the screen to portrait orientation. This means that you're always viewing it in a portion of the screen, although this does mean Panasonic's been able to fit some controls below, including the zoom controls. When playing back, you can view in landscape or portrait, though.

Panasonic's intelligent auto (iA) system is in use here, which adjusts the exposure and white balance as you go. It's paired with a live facial recognition system, so whoever you're recording will be presented in the best light possible. It's also got a much-improved night mode to round it off.

The TA20 is about the size of a modern smartphone, though a fair bit thicker. It's light enough to stick in a pocket and carry around without really noticing.

In the box, you get a USB cable and a small tripod. The placement of the threaded hole right on the edge of the TA20 makes this little tripod a little delicate, but it's capable of doing a job.Oh, and it can be picked up for around £150.