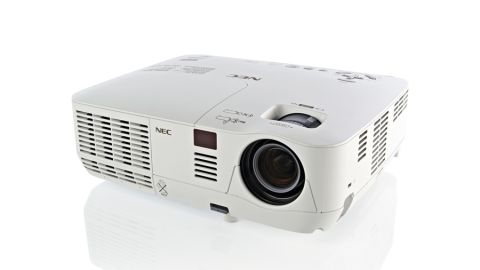 With 1080p projectors available for £600 or less, you might think the case for saving money on a 720p model like the NEC V300W is pretty marginal. To an extent, you'd be right.

We certainly think forking out an extra £100 or so is worth it for the future proofing and peace of mind that Full HD buys you. But that's an argument that mainly applies to conventional home cinema and gaming larks.

Chuck stereoscopic 3D into the equation and the sums work out a little differently. For starters, adding 3D to a 1080p projector pumps up that premium. But what exactly do you miss out on by dropping the increased detail of those 1080p pixels?

For sure, the pixel grid is much more visible with a projector like the V300W. You also get a lot less physical screen real estate. The subjective difference regarding actual visual detail isn't as huge as you might expect. It's fairly obvious with static images. But thanks to the way the human eye works when observing motion, the gap is relatively small when it comes to movies, games and live television.

It's more the sort of notional difference that niggles at you, the knowledge that slightly sharper visuals are available rather than a direct sense that what you're looking at isn't crisp and clear.

Most importantly, the NEC V300W kicks out some really super images. As you'd expect from the 3,000 lumens lamp, it's got plenty of punch. What you might not be prepared for are the exceptional blacks, they're as deep and inky as anything else here. In fact, they might just be the best.

The overall result runs the Optoma HD23 awfully close. That said, it does have a few short-comings beyond the reduced resolution and detail. The V300W is a pretty compact unit that weighs just 2.5kg. Great for portability, but it makes for a noisier fan.

Our test images also betrayed some evidence in compression in both black and white scales. But, frankly, those sorts of shortcomings in synthetic tests are pretty academic. As 720p-class beamers go, this is a lovely little unit.