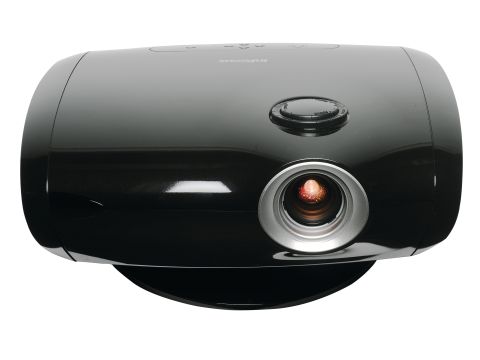 The InFocus IN72 has super-sleek looks

Despite the resolution limitations, the IN72 performs admirably for the price

HD-Ready or not? Well, not, it seems, with the InFocus IN72, so how come we like it so much? We'll come to that but if you want a clue in a word: price.

The IN76, which preceded this model, is a mightily successful HD-Ready product and with the IN72, the company is consciously moving downmarket to make a similar impression at the budget end of the high street.

What it retains, is the sleek, lavish design all the way down to the ball-jointed stand on which it can rotate and tip to allow the weirdest of projection areas.

It's in the connection department that you get to the heart of the IN72's capabilities, as well as its limits. On the bright side, it has an HDMI input and a clever M1-DA multi-purpose socket that lets you hook up DVI, USB, component and PC connections providing you use the right adapter. It means you can hook up to two digital sources simultaneously, which is nice.

Its Achilles heel could be its 'limited' resolution, what with it using a 480 line panel. So with its impressive £900 price, how does the IN72 perform, despite not having the minimum HD vertical resolution of 720 pixels?

The answer, we're happy to say, is brilliantly. For starters, its HDMI input does accept high-definition sources, even up to 1080p. Image processing is done via a PixelWorks DNX 10-bit engine and its class shines through as a scaler when it handled King Kong on HD.

When the big hairy one crashes about from cliff to cliff, there was no lag or distortion of movement, while equally, the ability to deal with extremes of light and colour were dealt with impressively with the sunlit canopy of the jungle shimmering with verdant shades.

Furthermore, black levels, for a unit priced below £1,000, were some of the best we have ever seen, particularly when observing the movements of the various giant bugs in the shadowy canyon after Kong has sorted out the Tyrannosaurs. Slight fault could be found in the form of an occasional slight rainbow effect while picture structure could also be made out from time to time due to the 'low-res' pixel structure.

But all in all, there is little to fault and much to commend from this stunning budget model.