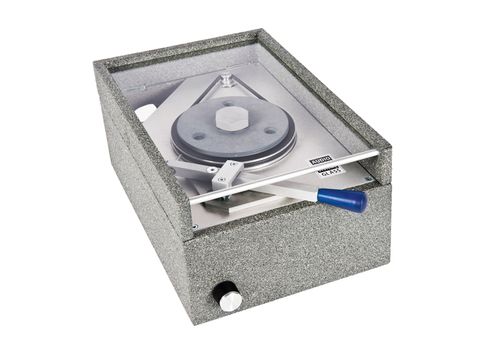 It's a bit unnerving when you first use this on your CDs, but it really does work

Lets you hear more music and less distortion from all of your discs. But a little messy for the listening room, unless you have a vacuum cleaner to hand

German company Audio Desk Systeme has come up with a machine that cuts a bevel into the edge of CDs (DVDs, BDs etc) and is designed to combat light scatter when playing an optical disc.

It sounds bizarre but even more odd is how well it works.

The CD Sound Improver is a simple lathe that's built specifically to cut a bevel on the playing side of a 12-centimetre disc. It has a belt-driven turntable onto which you clamp the disc and a specially mounted cutting tool.

This tool also makes the disc totally concentric, thus reducing any potential vibration that an off-centre disc will induce in the disc transport. A surprising number of the discs I bevelled were not truly concentric.

It's a little unnerving to start slicing the edge off your favourite CDs, so my initial investigations were done with a pair of identical CD-Rs, in order to have something to compare results with.

The process is pretty straightforward once you steal yourself to get going and its very fast to do, twenty seconds is enough. You then need to mark the edge with the supplied permanent pen.

As one would hope with small-scale German engineering, build quality is very good, while the lathe and cutter are remarkably good value. You won't find many accessories that offer this sort of quality/price ratio.

There's a port at the back for connecting a vacuum cleaner hose to extract the swarf which builds up quickly, and the cutting tool, or burin as it's called, is said to be good for 2,000 discs and can then be replaced.

The knob on the front adjusts speed: run it fast for cutting and slow for marking with a permanent marker afterwards. In practice, turning it by hand makes this second process a little easier.

How it makes a difference

The effect is not mind-blowing, but it's certainly worthwhile. Discs that have been 'improved' clearly have wider dynamic range, thanks to a lowered noise floor that naturally lets more detail through. Nothing changes tonally and imaging remains the same, but you can hear further into the mix and the nature of sounds is easier to distinguish.

There is a general cleaning-up of the sound across the board, so bass is better defined and more punchy, while the treble has more air – cymbals, for instance, sound more realistic.

On one album of percussion and drums it was not possible to hear exactly how some of the sounds were being made prior to bevelling and marking, but after machining the extra resolve gave me enough insight to be able to visualise the instruments (if not actually name them!).

The improvements wrought by this device are clearly worthwhile if you want to hear more of what's on your discs. And you'd have to spend a lot more on cables or hardware to get the same effect, this combined with the fine build quality make the CD Improver something of a bargain.