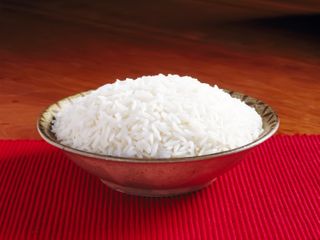 Rice: it's not just a staple part of your diet you know. It'll fix your mobile phone as well

It's been a positively inspiring week in the world of tech - we're starting to think there's something in the water.

Over at NPR it was a keyboard.

After learning that the average keyboard harbours more bacteria than a toilet seat, one woman carefully stacked hers in the dishwasher for a quick rinse. Amazingly, the inevitable didn't happen; the keyboard is still fully operational - and cleaner of course.

And the best way to dry said electronic kit? In rice, apparently. A Washington Post reporter was able to restore his soaking mobile phone to full working order - after dropping it down the toilet ( easily done , apparently) - by marinating it in a bowl of uncooked rice overnight.

Better to sacrifice a bag of rice then your alcohol reserves , as per alternative methods. That's what we say.

Gadget of the week

It was a tough one this time round. We're torn between the extremely cool sit-on vacuum cleaner , and the altogether-less-wholesome Squirrel Catapult . There was also an exceptional effort in the form of The Carpet Alarm Clock : a small mat you're forced to stand on to make it stop.

Which is great, unless you own a dog. Or a cat. And don't put it upside down at your bed either, or it'll be 03:80 in the morning. And that, as one astute blogger comments, just doesn't help a hangover one bit.

Here's food for thought: a prisoner at Swaleside Prison on the Isle of Sheppey was caught with an entire phone charger hidden up his ****. Apparently a search of his cell also revealed two "fist-sized" blocks of cannabis and cocaine.

And congratulations also to the man who finally managed to get himself a Zune tattoo. We'd like to tell you it was a spur of the minute thing. In fact, he was so pleased that he came back a few days later for another one. Nice touch.

A 17-year-old car crash victim turned his fellow hospital patient's life-support machine off because it was keeping him awake. If only nurses had given him a Squirrel Catapult to help pass the time instead...