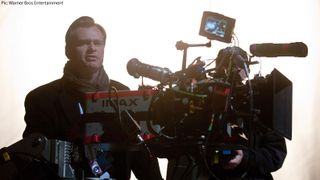 The new Batman movie's out in a fortnight, and like all right-thinking people I'm going to see it in IMAX - which is exactly what director Christopher Nolan thinks you should do. "IMAX is aces!" he says. "3D is for losers!"

OK, those weren't his exact words, but you get the idea.

I really wish Hollywood would dump 3D and embrace IMAX instead.

As the parent of a four-year-old, 3D is aimed right at me: to the best of my knowledge there isn't a single cartoon crapfest that hasn't been released in three dimensions. We go to the 2D ones, though, because even at four the novelty of "OOH OOH POINTY THING POINTING AT ME OUT OF THE SCREEN" has worn off.

3D is overpriced, it gives you sore eyes, and it makes your kids act as if they've been possessed by the devil himself.

Most of all, though, 3D just doesn't work.

The famous problem - if you notice the 3D, 3D has failed because you've stopped paying attention to the story; if you don't notice the 3D, then why did you pay extra for it? - is often exacerbated by shoddy 2D-to-3D post-processing, and in a few of my local cinemas, projectors that don't focus properly.

There ain't no headache like an out-of-focus 3D headache.

When you consider all the cons of 3D - the price, the stupid specs, the hurty-eyes bit when you look at the background and it's all blurry - against the single pro, which is that at some point you'll be able to go "OOH OOH POINTY THING POINTING AT ME OUT OF THE SCREEN", because nobody's ever seen that in a cinema before... it's proof that Hollywood thinks you're an idiot.

I can make my point in just three words.

Everything 3D does wrong, IMAX does right. Where 3D begs you to notice it - the aforementioned OOH OOH POINTY thing - IMAX just draws you in deeper; where 3D is dull and dark, IMAX is astonishingly vivid; where 3D makes you wear stupid specs IMAX doesn't demand facial furniture; and where 3D ticket prices feel like a legal mugging IMAX makes you feel like every penny is on the screen.

Oh, and you can't do IMAX at home. No matter how big your telly and how close to it you sit, you simply cannot duplicate the OMFG WILL YOU LOOK AT THAT AAAAGH AAAAGH AAAAGH you get from a good IMAX movie.

That's not just important for Hollywood, although of course it makes pirates' lives more difficult. It's important for me too: as a parent my nights out are few and precious, and if I'm going out I want to make it count. I don't want something I can replicate at home; I want thrills and spills and a screen so big that when I look towards the top of it I dislocate my own neck.