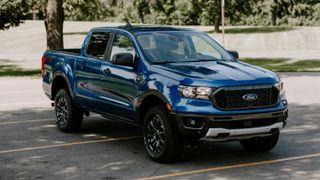 You learn more about a vehicle after driving it for 600 miles than merely cruising around the block a few times. The technology reveals itself over time, mostly because there are so many different situations you encounter. On a trip across two states, I found that a 2019 Ford Ranger provides an interesting mix of slightly aggressive – but not too aggressive – tendencies.

I say ‘interesting’ because I know there are trade-offs with safety tech. The Ranger, a midsize truck that handles more like a car than full-size models, provides both adaptive cruise control (the truck adjusts its speed for those in front of you) and lane-keeping (the truck nudges you back slightly into your lane if you move to the side suddenly).

So that all makes sense, but the trade-offs have to do with the craziness of other drivers, unexpected detours, road impediments, construction delays, and even a mild road rage incident or two. I experienced all of those, and it’s obvious the Ranger 'experienced' them as well.

For starters, adaptive cruise is an awesome invention – it has been around for many years, but I’ve never tested it on a long haul route in a truck before. You can pay perfect attention on a short commute to work. For over 600 miles of driving, it’s impossible to stay vigilant at all times.

A driver swerved in front of me once and the Ranger reacted aggressively, slowing down suddenly. Yet, in a similar incident, a driver moved over slowly and the Ranger eased off the throttle for me. This is how autonomous driving will work: reacting suddenly or reacting slowly, depending on the situation. We’ll have to get used to this passive-aggressive bot behavior.

In one situation involving road construction, I noticed how the lane-keeping proved invaluable. With a non-existent shoulder, the Ranger managed to spot the lane marking and keep me centered, adjusting as we drove along in real-time. It felt odd because the lanes were more narrow than any other time on my 600 mile route. It was super helpful.

In a mild road rage incident (I was not directly involved), I imagined how the safety shield could have monitored other cars up the road, noting slightly aggressive swerving and speed-ups that might have been the result of an over-caffeinated driver. Not too troubling, but I expect AI in cars to start predicting behavior long before it occurs and long before it has anything to do with my vehicle. I wished the Ranger had slowed down to avoid drivers far ahead of me, but of course the sensors don’t scan that far ahead or react with that much fore-knowledge... yet.

Someday they will. I’m looking forward to the day when cars know about narrow lanes, and can even re-route us knowing that we don’t really like to drive so precisely (based on previous perceptions about how we drive and how anxious we get). You could call that predictive cruise control or predictive lane-keeping. The tech is available; the demand might not be.

And, we know that autonomous cars will align nicely with connected car tech, so a bot might know about the behavior of other drivers and adjust our own vehicle accordingly.

On my trip, the overall impression was that safety shields are worth it – they are not perfect, because they have to deal with an imperfect world. I’d rather have a car overreact slightly or maybe underreact at times than to only rely on my own reaction.