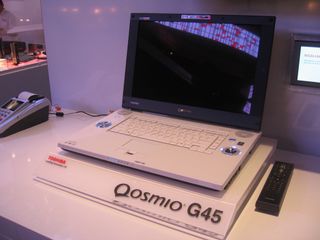 According to Toshiba, it is undecided what to do about HD DVD drives in notebooks. TechRadar attended Toshiba’s UK press launch in lovely Hertfordshire this morning and found that it hadn’t quite made its mind up.

Tosh has been a bit silent on the subject of HD drives in its lappies over the past few days, pushing us from pillar to post in our quest to find the truth. But at the launch this morning, Olivier Van Wynendaele, deputy general manager of HD DVD at Toshiba, elaborated on the subject – if only a little. He said the corporation had “not yet decided” on its HD DVD strategy for notebooks since the corporation pulled the plug on the format.

Whether to persevere with a dead format

Presumably it will have to ponder whether to strip them from the spec of existing models or persevere with pending replacement models coming on to the market.

Now, unfortunately due to non-disclosure agreements, we can’t elaborate on the IT products shown at the launch this morning, but we’re sure you can imagine the kind of computing-based products they might be. However, Tosh was tight-lipped on whether any of them would contain HD DVD drives.

The first Toshiba notebook to incorporate an HD DVD drive was the Qosmio G30 back in 2006.

Check back later as we’ll have details on other product announcements from the launch.