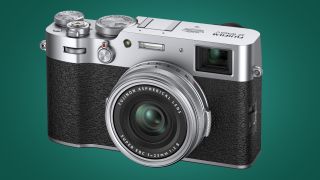 One of the most anticipated cameras of 2020, the Fujifilm X100V, has been officially announced – and the premium compact brings a host of new features that (very nearly) make it the perfect street photography sidekick.

How does it improve on its predecessor, the X100F? There are three main new features. The X100V brings a new 26.1MP APS-C X-Trans 4 sensor (the same as the one in the Fujifilm X-Pro3), a two-way tilting touchscreen, and a redesigned 23mm f/2 lens.

This means the Fujifilm X100V is effectively like an X-Pro3 with a fixed lens – in other words, a charming retro compact that should be ideal for street photography and travel shooting.

Other new features include the ability to shoot 4K/30p video and boosted continuous shooting speeds (up to 20fps with electronic shutter, or 11fps with the mechanical shutter), which should help when capturing unpredictable action scenes.

Perhaps the most noticeable difference for X100F owners, though, will be the improved autofocus, with the on-sensor phase detection AF benefitting from the improved speed of the new X-Processor 4.

Elsewhere, the X100V also boosts the series' electronic OLED viewfinder resolution up 3.69 million dots, while the battery life goes up to a claimed 350 shots when using the EVF (up from the X100F's 270 shots).

So where does the X100V miss the mark? While it's difficult to criticize it too much until we give it a full review, it's a little disappointing that the X100V still lacks weather resistance. That said, Fujifilm says you can make the X100V weather-resistant by adding a kit comprising the AR-X100 adaptor and filter, which will be available for £99.99 (about $130 / AU$195).

The camera's aluminum construction will, of course, make it a hardy little companion, but it would be nice to know that it could survive all conditions out of the box, rather than needing an adaptor and filter.

Another potentially polarizing change is that the X100V, like the Fujifilm X-T30, has  lost its D-pad. We didn't find this to be major issue with the X-T30, and you still have the quick 'Q' menu button and touchscreen swipes for navigating settings, but those upgrading from an older X100 camera might find this to be a step back for the series.

Still, as long as you like the idea of shooting with a fixed, 23mm lens (equivalent to 35mm), then the X100V is shaping up to be a very fine retro, premium compact. Its lens now has two aspherical elements, which will apparently improve its resolution and help reduce distortion. We're looking forward to seeing if that's the case in our full review.

Looking forward to snapping up an X100V? You won't have to wait too long. It's available in two finishes – all black and black/silver, with both versions priced at $1,399 / £1,299 / AU$2,349. The Silver model will be available from February 27, while the Black edition (above) will hit shelves from March 12.

This means that, when you take inflation into account, the X100V is effectively the same price as the X100F was when it launched in 2017, despite rumors that it might become a lot pricier. Still, if that price tag is a little too steep for you, it'll be worth looking out for price cuts on its X100F predecessor, which could become a street photography bargain in the coming months.