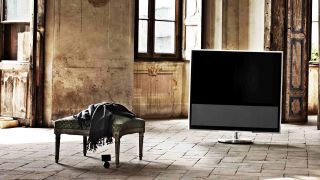 Bang & Olufsen has unveiled its first internet-connected TV in the form of the BeoVision 11.

The 360-degree automatic picture control also sets brightness and contrast based on the ambient light in the room, while you can also use dedicated picture modes for watching films and gaming so you have the best set up for the subject matter.

As for the internet connectivity, the BeoVision 11 supports HbbTV – otherwise known as hybrid broadband TV, a European standard for smart TVs which B&O reckons future-proofs the set.

It uses DLNA so you can easily stream stuff from your phone, as well as offering an Ethernet port, two USB ports, six HDMI sockets, dedicated cabinet space for Apple TV boxes and Wi-Fi connectivity.

The BeoVision 11 comes in 40-inch, 46-inch and 55-inch screen sizes, with a choice of six different fabric colours to cover the speaker set at the front.