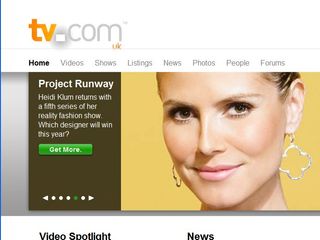 The CBS owned TV.com is expanding to offer more and more video content on the web.

Bought by CBS last year – as part of the CNET group – TV.com has slowly but surely changed itself from a information hub for all things TV-related to actually hosting shows on the site, much like its rival Hulu.com.

To compete with the likes of Hulu.com – which is owned by Fox and NBC but plays host to many a TV show distributor – CBS has initiated a whole host of new partnerships for the site, including content deals with Showtime, PBS, Sony, MGM and Endemol USA.

Alongside these new content deals, TV.com is upping its social-networking features so users can live chat about TV shows, contribute to episode guides and write personal blogs.

While it's full steam ahead for the online video industry in the US, content from both TV.com and Hulu.com due to convoluted distribution deals is not available to view from a UK IP address.

And with Project Kangaroo stalled for the time-being, it seems that an online go-to portal for all your favourite shows, regardless of who is the broadcaster, is still some time off.