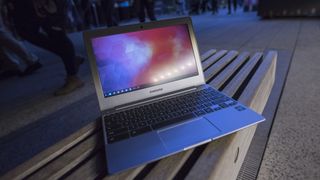 Windows 10 has arrived, with plenty of promises to fix all the woes that mucked up the experience with Windows 8. But no number of improvements is going to make the bad memories of the Start screen go away. Then there's the matter of whether Cortana, Xbox streaming or Windows 10 other features are high on your priority list.

However you – or we, having thrown it 4.5 stars – feel about the new Windows, there are plenty of reasons to ignore Microsoft's latest operating system altogether. Both Google Chrome OS and Apple OS X have proved to be exceptional options.

Whether it's the easy usability of OS X Yosemite or the lightweightness of Chrome, both offer plenty of advantages to make either your operating system of choice. We've seen what Windows 10 holds over its competitors, so let's play devil's advocate and look at the key ways that Google and Apple each have honed an edge up on Microsoft's latest operating system.

Apple and Microsoft have been going head to head, and while Macs have historically been the underdog in this race they're very popular among creatives and students. MacBooks are by far some of the prettiest laptops with an unbeatable build quality. What's more, OS X comes packed with useful applications, free updates to newer versions and fewer security headaches than Windows.

Apple has done plenty to tie its platforms together. Thanks to Handoff, you can easily transition from your life on the iPad and iPhone to the computer, or vice versa. For example, with Safari (or even Chrome) you'll see an icon pop up on your dock when you have a web page open. Just click that if you want to continue reading that page on your Mac.

Yes, other browsers offer syncing tools, but thanks to Continuity, this process is much faster and rather easy to switch over between devices. Then there's also iMessage and Facetime, which let you keep a conversation going across an iPhone, iPad or Mac with ease.

On Windows 10, you can migrate seamlessly between desktop, laptop, tablet and smartphone through Universal apps. But, while you can work across Windows 10 devices with everything synced in OneDrive, Microsoft is still working on fleshing out its suite of apps – including those for video and messaging.

If you want the full-fat multi-platform experience, the Handoff and Continuity features built into Mac OS X 10.10 Yosemite are your best bet for now.

One of the best things about being a Mac user is not having to worry about paying for operating system updates. Thanks to the recent string of free upgrades that started with Mac OS X 10.9 Mavericks, it costs zilch to make sure your Mac is running on the latest OS complete with all the new features.

Windows 10, meanwhile, will only be free for a year for those upgrading from Windows 7 or Windows 8.1. However, further updates to Windows 10 issued online will be free. That's a bit more confusing than Apple, which simply limits its free updates to a subset of older computers dating back as far as seven years ago.

While Microsoft plans to make Windows 10 its main focus for the next five year with free updates of all sizes, including new features, but who knows whether its successor will roll out with a similar free upgrade path.

OS X is tops at gestures

One of the reasons it's so fast to work in OS X is that Apple has built in so many touch gestures into the Mac's excellent trackpad. It's lightning-fast to move from one app to another or to launch Mission Control with a quick swipe. Windows 10 is still trying to catch up in the trackpad quality department by introducing more gesture commands, like three-finger swipe to activate the new Task View.

Microsoft is also working with its manufacturer partners more closely than ever through its Precision Touchpad initiative. Apple, meanwhile, has been the king of trackpads for years, with smooth as butter scrolling and perfect sensitivity right out of the box.

Windows 10, on the other hand, includes a Universal (formerly known as the mobile) version of the Microsoft Office suite. But there's a catch: you'll need an Office 365 subscription to actually edit any documents on any Windows 10 device larger than 10.1-inches.

OS X El Capitan is around the bend

Microsoft isn't the only one with a new operating system coming out this year, Apple also has plans to update it desktops and laptops with OS X 10.11 El Capitan. Though it looks to be light on radically new features, El Capitan promises to improve user experience and performance, including a larger focus on window management and multitasking

The next version of OS X will also introduce window snapping and a revamped multi-desktop management system called Spaces Bar. At the same time, under-the-hood additions, like Metal graphics technology, will enhance the gaming capability of Macs and make everyday activities, like launching apps, even faster.

Now, it's fair to say that Windows has offered some of these desktop management features since Windows 7, like window snapping. However, their inclusion in El Capitan makes OS X feel more feature-complete in area where it has long been inferior to Windows, thus leveling the playing field.

Current page: So, you need to pick an operating system