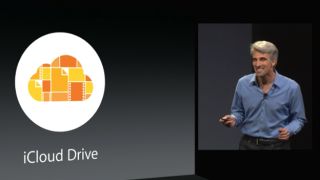 iCloud Drive works across OS X, iOS and even Windows

Apple kicked off its 2014 Worldwide Developers Conference with a confusing video in which regular folk wondered what app developers looked like. It followed that up by launching into the announcement of Mac OS X Yosemite.

Apple Senior Vice President of Software Engineering Craig Federighi took the stage to describe some of the new additions in the OS X update, including important new Mail and iCloud features.

These features are known as iCloud Drive and Mail Drop, and they are Apple's answers to services like Dropbox and Google Drive.

"We all know that documents in the cloud provide a really convenient way for working with an app that works across all platforms," Federighi said.

But iCloud has some limitations in that area, right? Not anymore, it seems.

With iCloud Drive, users can work right in Finder with files and documents from OS X, iOS apps and even Windows.

Users can organize files in iCloud Drive using folders and tags that will be synchronized across all their devices.

Federighi said Apple, "focused on the basics" for the Yosemite Mail app, including "reliable syncing, fast switching between mailboxes, [and] quick fetches of your new mail."

But they also "wanted to address a fundamental problem with email": limits on attachment size.

So Mail Drop lets users choose to send large attachments through iCloud instead of through their recipients' email servers.

The feature apparently strips the attachment from the message and sends it through iCloud, while the message goes through the email servers as usual, and they're joined up again as they hit the recipient's inbox.

These features will arrive in the fall with OS X 10.10 Yosemite.