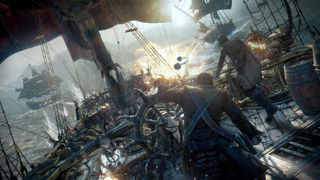 In 2003, I developed a complicated relationship with Akella and Bethesda’s Pirates of the Caribbean. So desperate was I for a pirate game that offered a real sense of what it’d be like to swash and buckle with the best (or worst) of them I continually returned to this game, despite its frustratingly clumsy controls and unreasonable demands on my limited PC.

I was also a fan of Sid Meier’s Pirates! At the same time. But it offered a very different kind of experience – in some ways I wanted something with the more realistic visuals and intricate gameplay that Pirates of the Caribbean offered, but with the consistent action of Pirates!

A long 15 years later, I might finally have what I was looking for in Ubisoft’s 2019 Skull and Bones. During E3 2018, I had the chance to go hands on with the game for a short demo of its Hunting Grounds mode, where you’re thrown into an open ocean, populated by other players as well as AI foes.

Peak time on the High Seas

In my gameplay session, I was almost constantly engaged in some kind of naval combat in a world that felt extremely busy.

At the start of the demo, I was given the choice of three ships, each with different strengths and weaknesses. There was a large frigate - good for firepower but lacking on speed - and two smaller ships which were faster and more maneuverable, offering different special abilities.

I opted for a smaller ship called the Jaeger, as it was light and nimble enough for me to run away from a fight (my most realistic reaction to a naval battle I’d imagine) but it also had a powerful forward cannon attack if I ever felt the need to take chase.

Aside from these front-facing cannons, my ship was so loaded with artillery I’m frankly amazed it could stay afloat; between front and broadside cannons and long-range rockets there’s rarely a moment during a fight in Skull and Bones where you don’t have the capacity to be firing something.

Before you enter the Hunting Grounds, you’re given your Fortune for the session and my group received ‘Favorable Winds.’ This means great sailing conditions and an ocean filled with merchant traders to pursue. But it also means a lot more competition.

Although Skull and Bones has stunning and highly realistic visuals, don’t think it’s a game bogged down in exhaustingly accurate details. While you need to work with the wind like any real ship, your vessel in the game is relatively easy to control, able to reach great speeds, make sports car-tight turns and fire relentlessly. The learning curve isn’t prohibitively steep.

I spent most of my play session slicing through the water and picking off AI merchant vessels around the same level as me. Circling them so that they couldn’t escape I’d fire on their sails to slow them down before turning my force to the bulk of the ship.

As you do damage to other ships, you’ll find that gold can be picked up from the sea. Do enough damage and you can get close enough to board a ship (a cutscene) or you can simply send them to the depths. Most of the time, I opted for the latter.

While you’re out there pirating, it’s important to keep an eye out for the red sails of bounty hunters. These are extremely powerful AI enemies and if you’re sailing on your own and catch their attention, you really don’t stand much of a chance.

I was doing so well during my session that I wasn’t really sure why I’d been told that I might want to make alliances with other, real, players in the game world. ‘I’m clearly fine on my own’ I thought. And, then the Portuguese came.

The game gave me the objective of finding some Portuguese merchant vessels to loot and eventually I found some through using my spyglass. Three large frigates. I could see other players in my session near me that I could have attempted to forge a temporary alliance with but bolstered by the confidence of all my previous victories I went in all cannons firing.

It was carnage. The ships encircled me as I had done to others and swatted me like the fly I was. I lost all my treasure and re-spawned into the game world a more humbled pirate.

Of course, fighting with other people isn’t the only thing you can do. Towards the end of my session, I came across a ship wreck which I could loot for one of three things: treasure (of course), repair materials for my own ship, or a disguise.

It’s the latter option that made me really keen to come back to Skull and Bones at a later time for a deeper dive into what it might offer. The idea that you can don the colors of a nation in order to get close enough to attack another ship without them attempting to flee.

All of this action also true of the multiplayer 5 versus 5 mode that I played during E3 2017 too, though that was more team-based than the fend for yourself format of Hunting Grounds.

From the limited time that I’ve had with Skull and Bones my overall impression is that this is a ferociously action-packed game, especially since I had recently been playing the very different and more leisurely paced Sea of Thieves.

That said, while it’s easy to get caught up and lost in the action of Skull and Bones I think this is a game that will take thought and skill to be consistently successful in. I’ve already learned that simply firing on whoever you like will only get you so far and I think given more time with the game, making and breaking alliances with other players will be an integral part of playing Skull and Bones. Picking your battles is likely to be the formula for success.

Between realizing the importance of alliances and discovering that I can loot shipwrecks for more than treasure, this is the first time in playing Skull and Bones that I've had a hint of it having some degree of engaging depth. We've still got a while before it launches in 2019 and I'm looking forward to seeing more.

If you are too, you can sign up for the beta right now.